Think about your decision-making as you hurtle down the highway. You're tired or hungry and you're looking for a place to either sleep or eat. And you see a sign. If the sign says "Best Western" or "Burger King" you already have a whole lot of criteria for your assessment. You either like and trust those brands or you don't. Either way, you can make a decision quickly.

And it's important to make a decision quickly because you'll be past the place in seconds and you probably won't turn around. Turning around is a lot more effort than stopping.

But what is the sign is not for a chain but for an individual motel or restaurant? Then the sign has to convey everything. 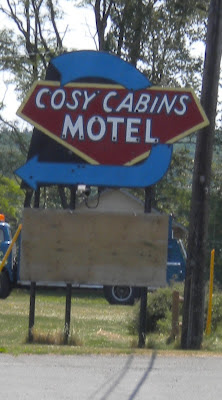 Cozy Cabins, Woodstock, New Brunswick
I love that and that isn't surprising because I was looking for nostalgia. That sign is a thing of beauty and it must have cost somebody plenty once upon a time. It must have been magnificent at night. It may still be, I only saw it during the day so I don't know if the neon still works.

But what is it selling? Right now the thing that stands out once you get past nostalgia is the blank piece of unfinished plywood on the bottom. That's where the features once were: "TV", "air conditioning", "magic fingers" whatever. All you have now is that they have cabins. You can't even say with any certainty that they are "cozy" in a good way. That's just the name of the place not a feature. Right now, the owners don't seem to have anything special to offer.

There are only two reasons to stop here now: either, like me, 1) you are attracting to old motels and want to visit as many of the vanishing breed as possible before they are gone forever, or 2) you are looking for the minimum footprint for the duration of a job you got in town.

Cozy Cabins is no longer on the main highway so you can't blame the owners. No one is going to see the sign anymore except for nostalgia hunters like me. 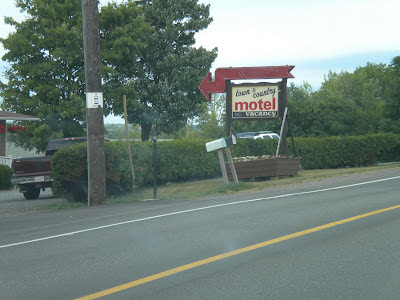 Another beautiful sign. Neither this nor the previous sign is original or, rather, both are heavily indebted to the famous Holiday Inn sign. But who cares? If you are going to be influenced, you may as well be influenced by the best.

The "town and country" also has a certain cachet from the name. It speaks of a time when words like "regency" and "brougham" and "coupé" and "estate" all carried a sense of being part of the gentry and everyone aspired to that. Did the hotel itself ever have it? When I was a kid it did. There was something about this stretch of road down near the river that smacked of country gentry. Not anymore though. 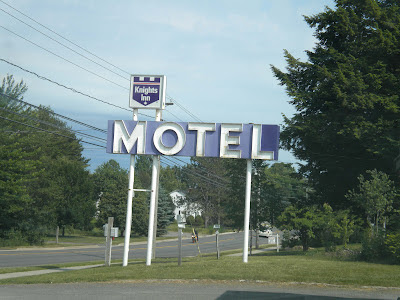 Knight's Inn is a cute pun. Too cute? Not for motels where cuteness such as "Dew Drop Inn" is long established as acceptable practice. Knight's Inn is also a chain but you get the feeling that they don't think their brand carries much value as the sign says it is much more important to them that you know it's a motel than which particular type. 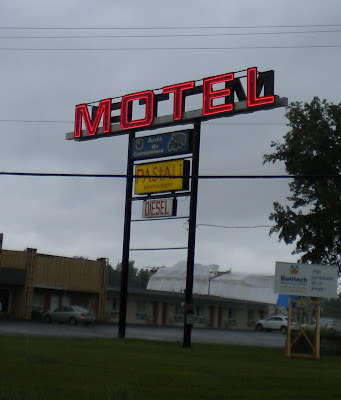 I forgot to make a  note of where I got this one. It carries the philosophy of the previous sign even further as the motel here has no name at all. For those of you who can't read French, the sign says that it's motel, that it's a truck stop, that there is a restaurant named Pastali and that there is Diesel. And that's all they give you to make up your mind. 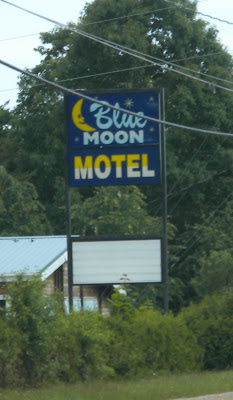 Looking at the Blue Moon it's hard to tell if it is still in business. OTOH, it has looked like this for years and years now. It actually looked a lot better this year than it did last time I saw it.

But that sure is a mighty pretty sign. The name was dreamed up in an era when everyone knew the song and that would have added something in its favour as you drove into town wondering where to stop. Like the Cozy Cabins above, the owners apparently don't think they have any features to pitch besides it's being a motel and having a nice name. And that may be all they need; I suspect there is always some business in Saint Andrew's.

There is a famous hotel in Saint Andrew's that has a beautiful golf course. This isn't it. The Greenside doesn't have a golf course and doesn't claim to have one. It is actually beside the green? Not as far as I could see but you may want to stay here while in town to golf anyway. In any case, perhaps enough of the cachet that goes with golf will rub off to pull you in even if you're not a golfer. 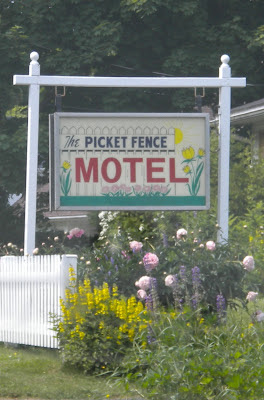 Hey, truth in advertising! Why you can see the picket fence right there under the sign. And there are real flowers, a well-maintained cottage-style garden in fact, to back up any implicit claim made by the tulips (or daffodils perhaps) on the sign. And you'd want to stay here why? There may be lots of good reasons but none are noted on the sign. But, as I have already noted, that may not matter in a perennially popular destination such as Saint Andrew's.

"Winsome" means attractive or appealing and it's a word that used to be used to describe the kind of girl a boy could imagine falling in love with, as opposed to a beauty he could want but would never meet. But the telling thing here is that the owners are actually selling you features. They have a pool, queen beds, deluxe continental breakfast ( a concept that makes no sense as a "continental" breakfast means simple and unadorned), microwaves and fridges. Perhaps the most important details are the CAA approved and "newly renovated" which tell you that they have been putting money into the place. They don't have as much money as Best Western so you aren't going to get a giant bed with two bazillion count sheets and all sorts of other luxury but the place has been kept up and we can beat Best Western's price and you won't regret it.

In other words, this the only sign in the collection that is actually effectively selling you something.
Posted by Jules Aimé at 4:07 PM