Hey guys, do you want to know what makes girls think you're stupid and ridiculous? It's because you keep saying things like what Robbie Collins of The Telegraph says in his review of Brave:


Its heroine Merida – a gutsy young royal whose sheepy tangle of tousled red curls is as untamable as her spirit – is no typical Disney princess either.

Sheepy tangle? Untamable? Gentleman, this is as carefully managed and tamed as hair gets: 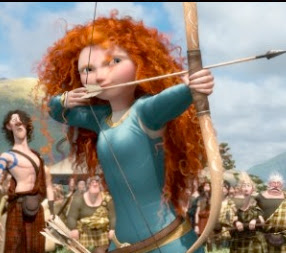 Yes, I'm sure the promotional material for the movie presents that hair as "untamable" too but every girl in the audience knows that to get that look, a girl would have to do a lot of work, add serious "product", and get professional help—spending huge amounts of her parent's money in the process. Not to mention making significant sacrifice in terms of lifestyle and activity. Forget about sports, horseback riding, archery. You couldn't do any of that stuff with hair like that. That hair also means that every time you got out of the shower or bed you would have devote serious maintenance to your hair before you could go anywhere. If Merida really were any kind of tomboy, she'd take the scissors to that high maintenance pile in a flash.

And there you can see the contradictions girls live with. She is supposed to seem natural and display effortless grace but she is also supposed to have a look that can only be achieved with a lot of artificial assistance and a lot of boring hard work. Boring not to the girl who does it or, more likely, has it done but to a people looking at her who want the payoff without having to think about what it took to get it. And the more enthusiastically some adult praises a look as natural and untamed, the more artifice it will actually take to get that look.

"If you had the chance to change your fate, would you?"
That's the question Merida asks us in the preview. It's a good question. It's a question girls understand in terms of sexual status. No mater how hard adults try to make them think differently, every girl immediately grasps that her sexual status is a big part of her fate. She knows that if she had skin, hair and a body like Merida she'd be a princess whom everyone treated as special. A male movie critic may look at the image above and see "untamed" and "natural" but every girl in the audience sees hair colouring, a permanent, make up, starting with foundation and then blush to give her skin that perfect smoothness and hint of pink, and a bra. She'd also need some make up to make her eyes look big and dilated like Merida's above.

For bonus points try explaining this: Given that Merida is supposed to be trying to make a very difficult shot in an archery contest in the image above, why is she shown not with a focused concentration that actual archers have but with dilated pupils and the slightly unfocused look that goes with being sexually aroused? That tells you what our culture thinks girls are really supposed to be good at.

That's why it shouldn't surprise us that the answer the movie gives us to Merida's question is, "It's dangerous to try to change your fate." That's because, as Robbie Collins correctly notes, it is a folk tale but also because, as he seems to have forgotten, folk tales are always about how dangerous it is to try to change your fate. We can pretend otherwise but note that much of the plot is devoted to getting things back to normal after Merida screws everything up by trying to change her fate.

It's also important that the person who pays the price for Merida's attempts to change fate is not Merida herself but her mother. Which is reassuring to the girls in the audience because the only thing they have in common with Merida is that they also have a conflict with their mother about who and what they can and should be and they know that they make their mother suffer but don't plan on stopping. Given that, it's kind of reassuring to see the perfect princess hurt and then save her mother.

(By the way, the whole "feminist" subtext that so many people want to hang on the movie revolves around girl children being allowed to get married when they want. Think about that a while. Because that's the big feminist issue of our age. Right? Mothers and fathers are forcing girls to get married younger than they want to be? And, seriously, how many girls do you think there are who suffer because they are oh so much better at sports than all the boys competing for their attention? Think of how utterly disconnected from reality you have to be to not fall of your chair laughing at crap like that.)

For some critics, the fate a girl might change is not her sexual status but her sexual orientation. Here is Entertainment Weekly's Adam Markovitz:


Ultimately, it doesn’t matter if Merida could be interpreted as gay. What’s most exciting is that she brings a new free-thinking attitude to the slightly staid club of Disney princesses, one that’s sure to appeal not just to gays, but to anyone who ever challenged an identity that was pre-assigned to them. Her strength in the face of opposition and her urge to forge her own identity (or, as she puts it in the film, “to change my fate”) both have the potential to ring true for moviegoers of all stripes, rainbow or otherwise. And regardless of whether or not Disney/Pixar intended it, those same traits are bound to make Merida an unofficial gay icon — even if she never comes near a Pride parade. If she did, though, she’d certainly be welcome.

If you buy the prevailing wisdom as expressed in Lady Gaga's "Born this way" then your sexual identity is pre-assigned. By your genes. And you can't argue with your genes so there is nothing you can do about it.

But that directly contradicts an even more popular notion that says you have, or should have, the freedom to be whatever you want to be. So we need a sort of double game where you are "born this way" but still get to be brave because you also re-invent yourself. That's the movie Markowitz wants to see so it's the movie he writes about even though he admits, at the same time, that it's not even remotely like the actual movie. In other words, he isn't writing about anything but himself.

Markovitz knows he is a poseur, by the way.  He gives the game away by talking about what Merida "could be interpreted as"; he reads the film as he wants it to be not as what it actually says. They taught him that bullshit at college. But no one believes it for a second. We all know that what really matters is what you really are and how well you play the roles that you are dealt in life.

What a girl wants and what a girl knows
Check out the image above again. Do you seriously imagine we are supposed to think that total princess is a tomboy???

The first thing to know is that when selling stuff to girls (as opposed to selling stuff to adult women), you sell her an image of herself a few years in the future. In images and movies aimed at girls the heroine is always a few years older than the intended audience. But, while the heroine may be in her later teens, her hopes, dreams and emotions are those of a girl in her younger teens. The audience is made up of girls who feel like her inside but don't look like her outside. They dream of having what she has, not as a means to get sex and certainly not to get married, but in order to be noticed and have status, sexual status. But they want that sexual status while clearly remaining girls and therefore not having to think about becoming an adult and making adult choices. And, at their age, the sexual status they seek vis a vis other girls probably means more to them than any attention they will get from boys.

Notice how Merida's body is sexual in a very controlled way. This is a Disney movie after all (and the fact that Pixar made it doesn't change that). She's wearing a bra for Pete's sake. Where she got such a thing is anyone's guess but she clearly has one. She pretty much has to because the shape that the breasts of a girl her age would take in that dress without a bra would cause all sorts of distraction. And we might also wonder where they got stretch fabric to make that dress in the first place (even after Merida bursts the stays  that made her dress tight it still clings to her skin)

And this is where the nasty truth protrudes into our discussion. Over at The Atlantic Chris Heller takes up the "lesbian" question:


While Markovitz's appeal to lesbian stereotypes is outrageous, his underlying question isn't. Merida really could be gay. She could be straight. She could be asexual. We just don't know. Over the course of the film, she shows romantic interest in neither boys nor girls; it's only by assumption that her parents—and, presumably, most viewers—think she's heterosexual.

Lesbian stereotypes? Here's a rude question: How many lesbians have you seen who look like Merida? There may be some but there aren't many and when young teens think "lesbian" they aren't thinking "woman with lots of sexual status". But it doesn't matter in this case because Merida is about being sexual not about having sex. If she's a "lesbian" at all, and no one who really wants to see this movie would ask in the first place, but if she's a lesbian she's an Anne Heche sort of lesbian. Which is to say, not really.

Note: This post has been combined with a previous one and the text was amplified and, I hope clarified a bit by changes made on June 30.
Posted by Jules Aimé at 3:39 PM