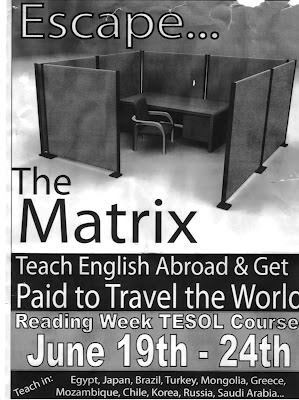 I wonder where they got the photo of the office cubical? It looks like they shot it out of an office supply catalogue from about twenty years ago. And The Matrix is a pretty old movie.

Here is the question: Do you think that the sort of person who might apply for a job teaching English as a second language is likely to be working in an office? Do you think they are likely to have any sort of job at all to "escape" from? I don't. Anyone who had a job would keep it rather than take a chance teaching English in Mozambique (ed. Hey, at least the civil war is over.)

The intended audience for this poster is a kid who has just graduated from university and has debts to pay off and no real employment opportunities. They also want to put reality off for another couple of years. The "lie", the "trick" or whatever you want to call it is that they are presenting this as a choice. As if to say, "Here you are stuck in a boring office job when you could be out having fun." The truth is the intended market is made up of people who have been having fun for years now and that fun is about to run out.

The thing is that it's not really their lie because it only works because the reader is lying to themselves in the first place. It reminds me of those personal ads that always started with the question, "Tired of the bar scene?" In truth the intended audience had either tried and struck out completely at the bar scene or, more likely, had never even tried in the first place but still wanted sex, preferably easy sex. The ad above is aimed at people who haven't had the courage to start their life yet and are desperately looking for one more escape.

So what are they escaping from? It would be more accurate to say they have been in escape mode for years now and they are trying to put off the end as long as they can. They have spent their high school and university on an extended holiday from reality and now they desperately need to earn money to pay off their debts. This poster offers them what at least looks like a chance to continue that holiday from reality.

Sometimes I get spam that says, "Hot girls in your town want to have sex now".  I think of that pitch when I see "Get paid to travel the world" above.
Posted by Jules Aimé at 8:00 AM