This photo turns out to be the key to my whole trip. It was kind of like Blow Up because I took it for one purpose and then discovered another in it. Unlike that old movie, the more I looked, the more I saw. Here is the photo, you can click on it to see it larger: 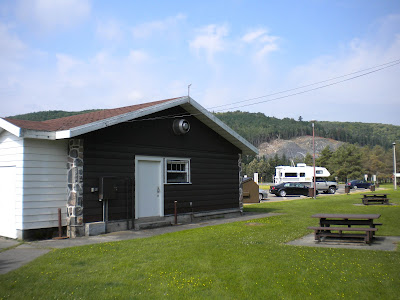 I took the picture casually, uncaringly and  initially because of the rock cut you can see in the background. That rock cut is progress. They are making that cut to put in a new divided highway some distance to the west of the present one. It's further away than the photo makes it seem. They have to do this because people have bought up property along both sides of the present two lane highway, which has been in place (with straightening an other improvements) since my mother was a girl. Ironically, many of the property owners who were too expensive to expropriate will be driven out of business when the road moves. The old road will still be in place but the traffic on it will largely disappear and so will a lot of gas stations, restaurants and motels.

The rest stop where I took the photo, and I place I always stop at, will also disappear. These things are going anyway, mostly because our politicians are too spineless to stop out-of-control litigation but that is a subject for another day.

Look at aesthetics here. That building in the foreground is the original and it is built in a style that derives from old Adirondack camps. Here is a side view: 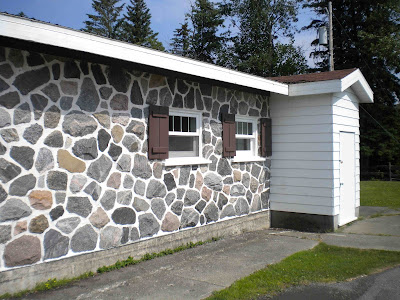 It's probably because of Teddy Roosevelt that this style spread to park facilities, summer camps, campgrounds, cottages and camps all over in North America.

The first thing to catch my eye, though, was the camper: 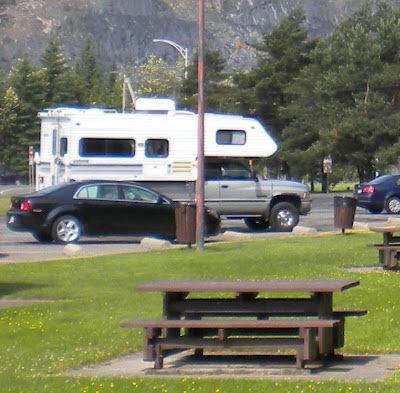 That's a vintage thing, there were campers like that when I first came to this rest stop with my family as a little boy. (Nowadays the only people who still seem to have them are fishermen.) The camper made a bigger impression on me than the building because it moves. That it was there was more powerful than a building that could be, and soon will be, locked up and left over because it's too much trouble to tear down. The camper represents a way of living that someone is still pushing, like a failing Christian denomination that still has a few older members.

What is the dividing line between traditions like stopping at this old rest stop and religious experience? I feel compelled to stop, like I would wandering off the way like a failed follower of Tao if I didn't stop. At the same time, I can see all this stuff melting away like so much superstition, like a false religion (as I too am melting away like grass that springs up at dawn and withers by the afternoon sun. But then there was that camper like a sign. And that became the theme. The past is hiding in clear view in the present. And I looked for it everywhere I went.
Posted by Jules Aimé at 8:57 AM