When a government decides to move a road it alters a whole way of life. This isn't really new in human existence. Rivers have moved, although not often, and shorelines have eroded or silted up forcing people to close up shop and move. But we have never seen anything like the way governments can alter entire regional economies simply by building a new road, a bigger, better road, a quarter mile west of the old road. 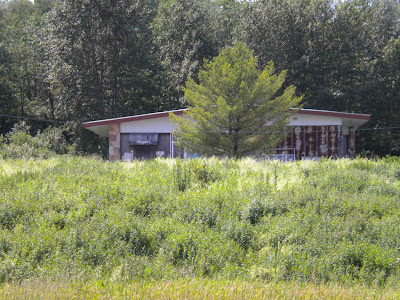 The sign on the awning on the left says, "Megan's". That was the restaurant. The right side was a gas station with a small store. Between them, they probably provided a couple dozen jobs in a rural economy where jobs are scarce. They also represented individual investment. The gas station would have said "Esso", or "Gulf" or ""Shell" or some other big name but if you got closer you would have seen the sign that said it was "Bob's Esso" or some such thing. It was a franchise. Bob put his own money into it and he kept adding to his capital investment over the years.

In the last few decades Bob would have had increasing competition from huge new places built by large corporations with very large capital reserves and his place would have started to look shoddy by comparison.

But he still had the location and that enabled him to hold on.

Then the government moved the road and he no longer had a location of any worth. Then Bob and Megan and many others who had put their lives' work into building up and maintaining businesses along these roads folded up.

If you think I'm being sentimental, you're right. I don't want to make some pity plea here. Service industries have to offer service and if their competitors can offer better that's that. But no one cares much about what happens in some rural area like this. And governments are huge artificial factors here and when they do something like build a new road, they speed up the upheaval.

Maybe even for the good. Sometimes some real creep has cornered some local market by getting the only prime location early and has long used his financial and political power to dominate locals in unpleasant ways. Even if the existing owner was a good person, they may not have put much capital into the business and quality and service may have lagged. Mind you, the price of that is that Megan's gets replaced by Subway or Burger King or some other larger company. That brings gains but you also lose something. The new road may as well be pretty much anywhere because it looks just like a divided highway pretty much anywhere.

But, whatever happens, a new road really stirs things up. And it always reduces the number of local jobs. The new highway is bigger and people drive faster and stop less often.

And we just float by someone's hard work in ruins and we don't even think about it much. You can't and shouldn't stop these things but there is something to regret hear.

And there is something to get nostalgic about.
Posted by Jules Aimé at 8:47 AM