Meet Leore. I scanned her out of the local freebie paper but you can see clearly enough to get the point. 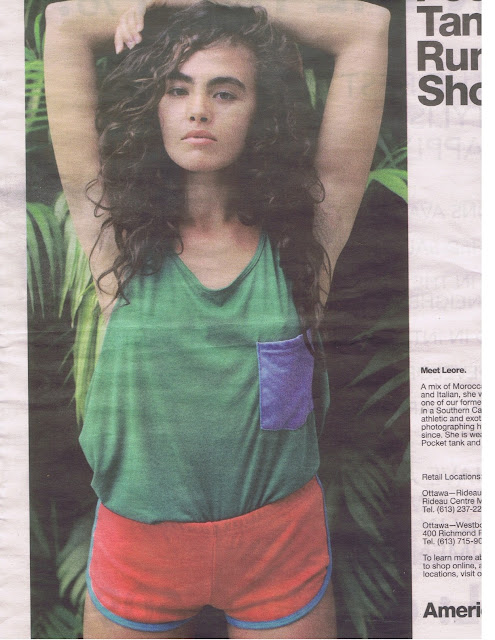 The photograph, OTOH, is mostly concerned with telling us that she has a vagina. Her face draws you in, and little wonder, but then your eye goes straight down to where that center seam of her shorts is doing its all important work.

That isn't an accident. Look at the lines that have formed on her tank top and shorts and the placement of her arms. "I say "have formed" but you can see that the lines on her shirt were very deliberately formed by pulling her shirt slightly untucked and then shoving down in one spot; a trick any clever girl looking at this ad will be able to figure out if she wants to.) Those lines were set up to create a series of triangles that all draw your eyes straight to the spot they want you to look (a trick the people who produced this ad learned from the Barberini Faun). And the shorts are cut to highlight that, ah, thing which is the point they want to convey to the women who are going to buy them. It's not just that the centre seam has been gathered in a bit so it will unfailingly do what it does here but that the fabric is cut so that the seam parts her and then the fabric clings to the outlines of her labia.

You were wondering, what is this year's body part? Legs? Breasts? Lower back? Shoulders? Tummy? Can you say "vagina" children? Well, you better learn fast because you are going to be seeing a lot of them this summer. Go away and learn and then Mr. Rogers will come back and teach you a lot of synonyms too.

That's originally a 1970s look by the way. Those shorts are obviously intended to recall Adidas running shorts. Back in the 1970s, a lot of girls discovered that if they pulled their Adidas shorts a little further up, the centre seam would do things that would get them all sorts of attention. The big hair and her erect left nipple on her bra-less breasts are also very 1970s.

Still, as I keep saying, if things have changed so much and girls are doing so well nowadays (and boys are supposedly doing so badly), then why do girls feel they need to get attention this way? It's not like we were any doubt that they have one and that we need to be reassured on that point. No one who sees a girl dressed like this will ever care much about what might comes out of her mouth. The whole image says she exists for sex and the good folks at American Apparel are counting on a whole lot of girls being eager to present themselves as sex objects. They're probably on safe ground.
Posted by Jules Aimé at 10:59 AM