Rather than build up to the answer, I'm going to answer the question right off the top: they are selling hatred. 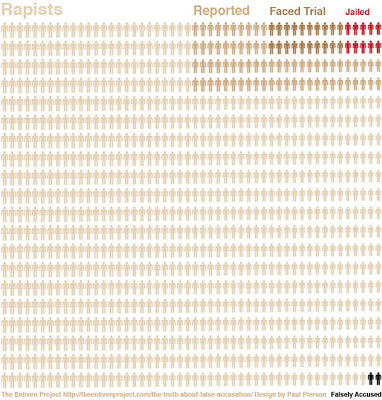 This graphic is ostensibly intended to prove that false accusations in rape are rare. There are two kinds of problems with it. The first is that the statistics it is based on are dubious at best and crassly manipulated at worst. I'm not sure it's worth it to get into the Alice-in-Wonderland world of rape statistics. Suffice to note that the largest group on the infographic is supposed to represent unreported rapes and that category is very difficult to quantify and anyone who claims to be able to do it with accuracy, as the Enliven Project does here, is lying, delusional or (most likely) a bit of both.

First of all, we might ask ourselves why the two little dudes labelled "Falsely Accused" are part of a graphic labelled "Rapists" in the first place. If they are falsely accused, then they aren't rapists. And notice that all the guys labelled "Reported" and "Faced Trial" are also labelled "Rapists". The presumption of guilt here is staggering.

Another huge problem with the graphic has been acknowledged even by Amanda Marcotte and that is that rapists generally have more than one victim. She cites figures that suggest that the average rapist has six victims. She further argues that the best statistics suggest that 54 percent of rapes go unreported as opposed to the 90 percent figure this graphic assumes. Doing a little rough math* that means that the 898 cases "unreported rape" implied by the graph should be only 117 rapes. If Marcotte's other figure suggesting that the average rapist has six victims, then that number of figures should be reduced to twenty rapists.

We can count all the guys who faced trial as singles for obvious reasons but the reported-but-not-tried category gets trickier. We couldn't honestly say that roughly one rapist is responsible for each six of those reported cases for the simple reason that being reported should sharply increase his chances of getting caught. Suffice to say, however, that the ratio of false accusations to actual rapists is higher than the graphic suggests.

Marcotte suggests that the graphic could be  made "clearer by just labeling the little dudes "rapes" instead of "rapists." Well, only if we reduced the total number of rapes to 219 from the current 1000 to begin with! And it would be even clearer than that if we gave all the stick figures skirts so all the little dudes were actually dudettes because what is actually being claimed here is the number of victims. Further, the two figures in the bottom right don't represent falsely accused rapists (a category that cannot have any members by definition) or rape victims but represent rather women who falsely accused men of having raped them.

Marcotte also suggests that the figures labeleld "Falsely Accused" would be more accurately be labelled "False Reports". I don't buy her argument but even if we did we would then have to throw out the unreported rapes altogether because false reports can only be meaningfully analyzed as part of the total number of reported rapes. This move, as virtually every aspect of the infographic above is a matter of comparing apples to oranges and claiming to produce meaningful data.

And we'd have to expand that for the apples versus oranges problem continues throughout. Notice that there are also a number of male figures labeled "Rapists" who only "Faced Trial". And you'll also notice that the graphic labels those who get convicted as "Jailed". Why not say "Convicted"? Well, because doing that would force them to acknowledge that vast majority of the "Faced Trial" were acquitted. Now given the burden of proof in the criminal courts system it is no doubt true that some of them were simply not proven but it is a certainty that others were simply innocent.

And that is also true of the larger category of "Reported Rapes". Some of these have to have been guys who were innocent and either falsely or mistakenly accused.

Now I appreciate that some are already saying, as I have already acknowledged, that rape is very hard to prove. But that knife cuts both ways. It is also very hard to prove a false report or false accusation. In both cases, there are certainly more of both than come to light. How many? Anyone who tells you they know is a liar.

The graphic isn't false because something being false requires it to make sense in order that it can be tested in the first place. Nonsense cannot be tested so it cannot even be wrong and that is the case here. But even nonsense tells you something about the people who created it and what it tells you is that they have it in for men.

Progressives and liberals desperately want to believe that crime is a social problem. In order to do this, they have to deny the blatant truth that virtually all crime is the work of a small minority called criminals. When that strategy is combined with feminist analysis of rapes, you get a tendency to blame all men for what is actually a tiny subset of men and, thus, you get the kind of nonsense presented as an information in the graphic above.

One question we might ask ourselves is, what do we know about the guys who are convicted of rape? They are, after all, the only guys in the big picture who we can say with certainty that they actually are rapists. If you really wanted hard, reliable data on rape, you'd focus on them. If I have counted the number of rows and columns correctly the total graphic represents 1000 claims of rape, many of which are dubious, only eight ten can certainly be said to be rapists. What are those eight ten guys like? I ask because if the answer is, "Very different from most men" then the approach most "rape activists" take to the problem is a complete waste of time and at least partly driven by a bias against men in general.


* Please note that all the math here is "rough" which is to say not intended to prove anything beyond following the logic behind the graph to its own absurd conclusions.