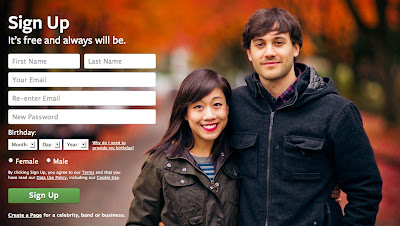 For a month or so now Facebook has been treating us to pictures of people on their log-in page. I wish I'd thought to start collecting them sooner. Last week, we had a shot of a couple walking along a trail on the seashore and this week we have this.

Does anything jump out at you? All sorts of things jump out at me but I think the thing that is supposed to make an impact is the maple trees in the background.

Yes, that guy is an aspirational image. You are supposed to either want to be him or, if you are a woman, be with him. But it matters a whole lot that he is standing right in the middle of the street in front of maple trees. It matters because that gives the shot a north-eastern feeling about it. That's either a university campus or it's an upper-middle class neighbourhood that's been around long enough for the trees to get that big. Wherever it is, it's in the north east because it's fall and the trees are so red.

Did I mention that last week's shot was a couple on a trail running along the top of a bluff over-looking the ocean. "If you're fond of sand dunes and salty air, quaint little villages here and there, you're sure to fall in love with old Cape Cod."

Facebook is an international thing and yet they are absolutely certain that if they show you an image of an upper-middle-class white boy from the northeast, you will think that Facebook is full of the people you want to connect with , which is to say white upper-middle-class people who live somewhere like New England.

Facebook's challenge was that they needed to appeal to your desire to be part of this very white culture while avoiding the criticism of being very white. So our aspirational white-boy icon has an Asian girlfriend! The feeling you are supposed to get from this shot is one of racial acceptance so it's probably not nice of me to remind you that you never see this image the other way around. And notice how he is comfortably taller than her. And she, while oriental, isn't the just-stepped-out of-Hentai chick of male sexual fantasies. She's an everygirl who just happens to be Asian.

She's a little old looking for university, which tells us that Facebook knows that their biggest user group is female university graduates. They chose her because most of the women who make up the largest group of Facebook users will look at her and not see a threat.

That female university graduates are the largest group using Facebook is a problem for them because women will abandon anything, including the world's most successful social media site, if they start to worry that mostly other women go there. And thus the guy. He's the dominant figure in the picture. He is the one they aspire to be with. He's young (aging better than the girl they can imagine replacing), he's successful and, oh yes, he's white.

Living next door to a campus, I can tell you that the mixed race couple you most commonly see on campus is a big back guy and much smaller white girl, usually blonde. You never see that image on TV, in the movies* or in advertising though. Odd that. Well, no it isn't. It would appeal, to some women to be sure but it would have the same effect on guys as would a picture of the guy above accompanied by an Asian hottie would have on women. And Facebook cannot afford to scare away guys.