I do pastoral visits on Friday. Most of the time, these visits end with a funeral. Today I made my last visit to someone who is going back to work. She beat the odds and her cancer is in remission and she has recovered enough to start work. I'll be seeing her again as a friend but she doesn't need the visits anymore. It's a pretty good day.

Anyway, here is something unusual: a successful piece of art.  And I should admit that I never would have picked this piece as a likely success. Why do I say that? This mural is in a neighbourhood where anything that stands still long enough gets tagged and it has not been. All the other murals around have, some have been obliterated. I hope I haven't cursed it by saying that.

So let's have a look at it. (Click on the image to see it larger.)

As I say, it's not my taste but it's not for me. It's for people who live in the rather rough neighbourhood where it has been painted and they like it.

How rough a neighbourhood? One day walking through, I saw an ambulance back up to the curb to pick a guy up. Even though the attendants were standing three feet from the door, they locked the ambulance while they put the guy on the stretcher. They have no choice because there are people on the streets here so desperate for drugs they'll try anything.

If you lived here, you notice two things about the people in the mural:
That doesn't make sense so let me explain. Let's have a look at a few of them. 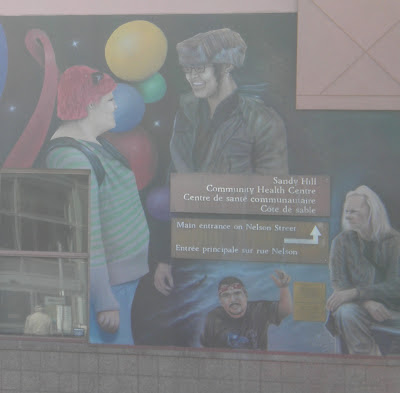 That's what your neighbours would look like. Except that these people all look content and happy. I can tell you from a lot of first-hand experience that if you look contented and smile at people around here, you'll really stand out.

And you'll be approached for money.

Still, I bet a lot of people living here wish they were and looked contented. Idealizing people isn't such a bad thing. Again, look at this: 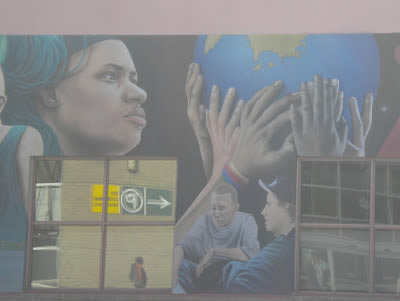 To be brutally honest, people here can often barely hold themselves up, never mind the world. Even the ones who do well really just exist from day to day. Social assistance in Canada gives people enough money for room, board, clothing and not much else. Every day, people in this neighbourhood wake up in places you wouldn't want to live in and then they go hang out sometimes just standing around on the street all day. There is no work for them, no purpose in life. 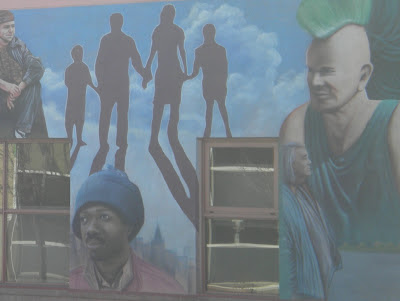 For these people all have or had families. They don't see much of them anymore. It's tough fitting in with your family if you are mentally ill or addicted to something. But you have a family and here is just enough of a memory—no facial details and clearly in the background—that it might help sometimes.


Finally, let's consider this guy. He's an aboriginal Canadian. There are a fair number of guys like him here. Again, they rarely look this comfortable or at home. But does that matter? 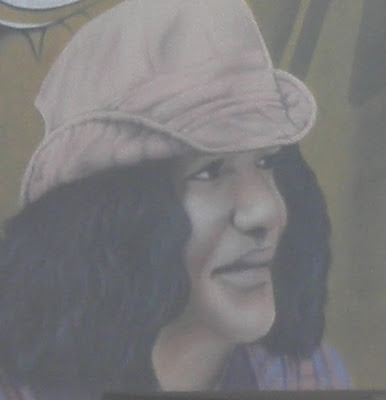 Here's the thing though. Look how comfortable he is above and now look at what is in the background. 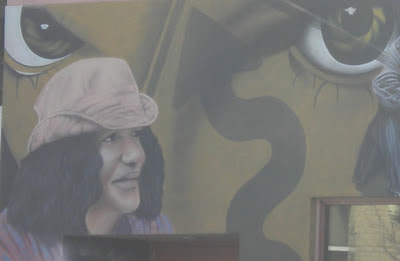 That isn't a lie. Lots of people around here have demons and they haunt them, and through them, haunt others. It's not a good life. It isn't a life you'd want for anyone if you could help it.

Problem is, you can't. No matter what you do, some people will live this life.
Posted by Jules Aimé at 1:13 PM