I commented on a campaign of a local shopping mall called the Rideau Centre a while ago. They have a new ad up this week. The theme is similar but, as a piece of advertising, this is a huge improvement over the last effort. 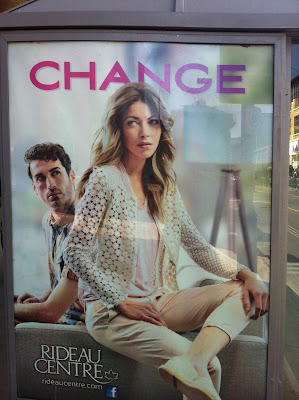 These days people talk about ads that are "edgy" all the time but that ad really is edgy. They are using an unhappy couple to sell stuff!!! It's not hard to guess who it's aimed at. Just ask yourself who you'd most want to be or to know; this man or this woman? And that is really important. Money spent on an ad campaign designed to attract men to a shopping centre is money wasted.

What's limiting her? The answer is her boyfriend or husband. But it can't be her husband in an ad like this. That would be a little too edgy. As was the case last time, the ring finger is visible to reassure us that they are not married (and, trust me, this is a detail most women never miss in a picture like this).

There is a little ambiguity because the ring finger is right at the edge of the picture, but it's there so you can check.

To finish the narrative, we have a woman who wants change in her life, we have the limiting boyfriend looking diminished, small and resentful, and, most importantly of all, we have the woman thinking of change. And by getting the women who sees this to associate the need for change with the Rideau Centre, the advertisement succeeds. It makes going shopping a little like cheating on your boyfriend and that makes it more of adventure. And that is edgy: shopping as an act of sexual betrayal!

Edgy ads aren't to everyone's taste, of course, but if edgy is what you want, this is about as good as it gets. Congratulations to who whoever put this one together.

Compare it with the previous ad from a  few weeks ago and the difference is quite striking. 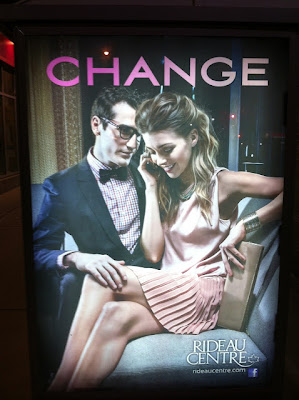 [Added: The Lemon Girl, just home now, points out that they probably have used the same two models in the two ads.]

Now look at the ad at the top of the post. The man is resentful and angry. They've had a fight. The woman is thinking. What is she thinking of? Change.

The irony here, by the way, is that the ad with the clear sexual content is much less threatening if you're a man. It's an edgy male sexual fantasy to be sure but it's your edgy sexual fantasy. (Assuming this particular fantasy appeals to you; if it doesn't it's just a weird ad.) The ad at the top of the page is very threatening to a man. I could explain this myself but I'll leave it to Lyle Lovett instead:


Have a great weekend everybody.
Posted by Jules Aimé at 3:26 PM