Note: This post has been edited and then reposted because I changed my mind about a few things.

It's often noted that you get a very different sense from looking at one side of a person's face versus the other. I was just about the close the blog for the weekend, when I noticed that an overlapping image had accidentally cropped the face of the woman in the ad I was commenting on earlier. The effect was quite jarring.

Although the combined image is of a woman who clearly is thinking of making a big change in her life and wants to be somewhere else, the right side of her face alone is more resentful but in a wistful and passive way:

The difference is quite jarring. It's hard to see how they could both be part of the same face.

Yet they are the same face. 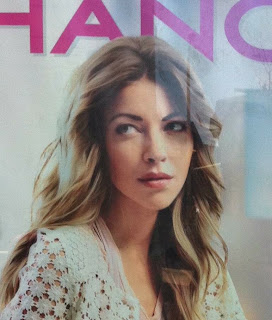 From a male point of view, the the whole face is more threatening than either side. However challenging the woman of the left side , there are possibilities there. However distant the woman on the right side, she's passive not passionate. Combine that aggressive eroticism with the sense that mentally she has already moved on and left you behind that the right side gives you, however, and there is lots to be threatened by. The combined face says, "You should see me when you're not around ...":