I've finished it now. It's uneven. There are bits, especially when Waugh moves from straight narrative to critical analysis that are weak enough to justify his embarrassment. But it's a treasure trove for Brideshead fans. Here are three examples.

1. In Brideshead we get Collins' refulation of modern aesthetic theory:


Collins had exposed the fallacy of of modern aesthetics to me: '... the whole argument from Significant Form stands or falls by volume. If you allow Cézanne to represent a third dimension on his two dimensional canvas, then you must allow Landseer his gleam of loyalty in the spaniel's eye'...

In Rossetti we get not the same argument but one that closely parallels it. Waugh defends the literary quality of Rossetti's painting. What he means by that is that Rossetti's paintings often refer to some "literary" moment. This need not be to some particular existing bit of literature but just the sense that there is some story behind the image. Our grasp of Rossetti's painting The Beloved, for example, to some extend depends on our grasping that this is a painting of a bride and her attendant women. 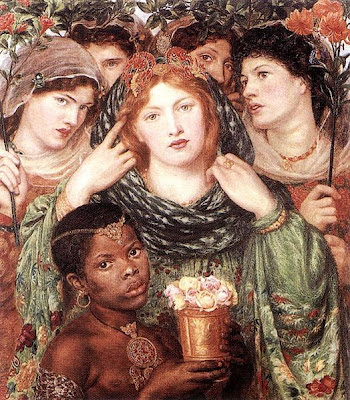 Roger Fry would have us look at a painting like that oblivious of any content and merely study the form. Our considering that this is a woman, that she is a bride, that she is not any bride but the bride from the Song of Songs et cetera would, in Fry's view, only cheapen our appreciation, would make it impure. That is what Waugh means by literary painting. With that background, you can see how this argument from the Rossetti book is very close to what Collins says in Brideshead:


It seems to me that the defence for 'literary' painting, if defence is needed—and not only for Rossetti, but for the sermonising of Hunt and even the chattiness of Frith—lies in the very word used in its condemnation. Why of the Arts should literature alone be expected to be 'impure'? Why, because we are accustomed to expressing our daily wants in words, shall poetry be allowed to traffic with other emotions besides the aesthetic emotion? If I may legitimately be frightened by The Ancient Mariner, why may I not also be by Wiertz?


2. At the very end of the Rossetti book Waugh condemns Rossetti and then finds some sort of special inspiration at work in him.


There is a spiritual inadequacy, a sense of ill-organization about all that he did. ...

... The problem is that here and there in his life he seems, without ever feeling it, to have transcended this inadequacy in a fashion that admits of no glib explanation. ... so Rossetti's art, at fitful moments, flames into the exquisite beauty of Beata Beatrix. It is the sort of problem that modern aesthetics does not seem capable of coping with.

A bit earlier he says,


The truth, as has been suggested before, is that Rossetti was unrestrained, as no artist of importance had been before, by any adequate system either devised by himself or imposed on him by convention. He was guided entirely by his own momentary preferences for a face or piece of patterned stuff, and by those of his clients, but there was in him errant and erring, streak of the purest genius, and it is typical that his next work ... [Emphasis added]

Let's leave his next work on hold for a moment and return to Brideshead and Charles' description of his experience painting Marchmain House just before it's destruction:


I held back from painting, like a diver on the water's edge; once in I found myself buoyed and exhilarated. I was normally a slow and deliberative painter; that afternoon and all the next day, and the day after, I worked fast. I could do nothing wrong. At the end of each passage I paused, tense, afraid to start the next, fearing, like a gambler, that luck must turn and the pile be lost. Bit by bit, minute by minute, the thing came into being. There were no difficulties; the intricate multiplicity of light and colour became a whole; the right colour was where I wanted it on the palate; each brush stroke, as soon as it was complete, seemed to have been there always.

3. Saving the most obvious parallel for last, there is the next work from above, the Beata Beatrix:


"You will remember how Dante dwells on the desolation of the city in connection with the incident of her [Beatrice's] death ..."

That probably feels familiar to anyone who has read Brideshead. Dante quotes a passage from the Lamentations of Jeremiah and Rossetti had these words carved into the frame of the Beata Beatrix:


Quomodo sedet sola civitas! 'How doth the city sit solitary that was so full of people; how she is become a widow that was great among the nations.'

In the novel, after sitting watching Charles paint Marchers, Cordelia describes the chapel that is no longer a chapel using the same quotation.


"... I stayed there until he was gone, and then, suddenly, there wasn't a chapel theer any more, just an oddly decorated room, I can't tell you what it felt like. You've never been to Tenebrae, I suppose?"

"well, if you had, you'd know what the Jews felt about their temple. Quomodo sedet sola civitas ... it's a beautiful chant. You ought to go once, just to hear it."

Of course, Charles is also a very different painter. His passion turns to buildings and the reasons they were built. Rossetti, and I'm with him on this, always turns to women.
Posted by Jules Aimé at 3:42 PM