The Summer of 42 by Michel Legrand

Thank God for the movies. They kept real music alive through the horrible years.

If you remember seeing this movie you're old. I remember. Lame, lame movie but everyone saw it and this song served as a theme for not just the movie but just about everyone's yearning crushes for a few years. There were lots of different versions recorded. That's the thing about a really well-crafted song, it doesn't depend on your hearing a particular recording to work. In fact it lends itself to different interpretations.

Think of just about any Beatles song by way of contrast. Yesterday, for example, is (according to some sources) the most recorded song in history. I'm not sure I believe that but there must be a lot of versions. But the thing is, close your eyes and see how many you can think of. It just doesn't have the musical or lyrical depth to justify doing it that many times.

In case you're wondering: The woman in the clip just learned that her husband died in combat and yes, cringe, cringe. cringe, she is going to have sex with that boy. If we believe the screenwriter, and I don't, it's based on a true story. But even if I did believe him, I would've thought that even a sex-crazed teenage boy would have grasped that there are sometimes when, in the name of everything good and sacred about love and sex, you don't even if she wants to and this is one of those times.

The actress is Jennifer O'Neil. She has a look that was really big in the late 1970s and early, 1980s. More or less straight hair, willowy, not large-breasted, heavy silk shirt and knee-length skirt. It's funny, given all the things that came back from that era that that look never has.

You can call me gay if you want, but, beautiful as she is, I'd rather have that cottage than her.

Must have those shoes too: 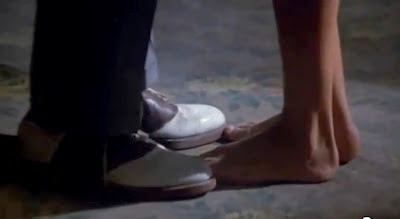 Words were written for the tune, BTW, and they are not bad. I like this version by Patricia Kaas a lot. (It's from an album called Piano Bar that I love. If you were in that cottage with someone you love and lying still because it's too hot and you are waiting for it to cool down so you can have sex, Piano Bar would be perfect to have on in the background.)