Suzanne shows a Jewish poet and an English photographer where to look ...

Cohen got some very-much-unwanted help in this from a photographer named David Hamilton and that unwitting collaboration is the subject of today's post.

We'll start with Cohen. The song is "Suzanne". Here is how he described it:


I wrote this in 1966. Suzanne had a room on a waterfront street in the port of Montreal. Everything happened just as it was put down. She was the wife of a man I knew. Her hospitality was immaculate.

That "immaculate" is a very ambiguous term. With no context, it sounds like she gave him sex. But the song blurs the lines between Suzanne the hostess and our Lady of the Harbour who is Notre Dame de Bon Secours (Our Lady of Good Hope in English) whose statue as Stella Maris (the star of the sea), is visible on the very street where Suzanne lives. She is the one whom the sun pours down like honey.

If you know your Catholic Mariology, you will know that Mary, aka "Our Lady", is also known as "the Immaculate Conception". Now that refers not to the conception of Jesus but to the conception of Mary as being immaculate, which is to say, without original sin. But Mary's conception is not without sex. Unlike Mary herself, her parents conceived through sex.

On the other hand, a man and a woman can not have sex and still be the opposite of innocent.

So ... well, you decide. We could go in circles here all day long, which I suspect was Cohen's intention.

At the same time, Cohen was mining a well-established genre here. It goes back at least as far as "It Happened in Monterey" from the 1920s and was carried on by dozens of other songs and books. The story was always the same, guy goes somewhere exotic, meets local girl, falls in love, loses local girl, she haunts him still. The exotic place could be a foreign land or it could be the bohemian part of town; in the end it was an imaginary exotica so it wasn't that important. In 1954, Jackie Gleason released a concept album called  Tawny that hit almost all the same themes as Cohen only he set it to swing jazz with strings.

Cohen's innovation was to really play up the suggestion of innocence and sexuality together that comes from the troubadour tradition via Catholic teachings about Mary and a new kind of music. At the time, the music was called "folk" but it has no connection with any legitimate folk music you'll find anywhere on this planet. It's actual roots are French chanson and country, both of which were very much a part of the popular culture of Quebec where Cohen grew up.

Cohen foolishly signed away the publishing rights of the song and new owner of the rights agreed to allow the German magazine TWEN to use the lyrics along with a photo spread published in 1969. Now, that may mean nothing to you but, trust me, this was one very influential magazine.


Is the Twen magazine the most influential magazine of all times? This question might sound pretentious but it is not far from the truth. Why was this magazine so influential? It was the groundbreaking design ideas, innovative usage of photography and full use of the advanced printing methods that made Twen a leader in magazine layout and design.

Cohen gave exotica a new music and TWEN gave it a new look. They commissioned a fashion photographer named David Hamilton to provide a photo spread to go with the lyrics. And he delivered.

He didn't have much to go on.


she is wearing rags and feathers
from Salvation Army counters

That's all the song says about her appearance. Hamilton took that and a vaguely Pre-Raphaelite bohemianism combined with Belle Epoque aesthetic and shot it all in soft focus to give it a sort of impressionist feeling and ran with it. There were only four photos in the original spread abut it was so popular that Hamilton spun dozens of books and, most famously, an ad campaign for Nina Ricci perfume out of it. Here is a sampler, warning nudity.

In a David Hamilton photograph, the subject is almost always innocent. You on the other hand, may not be. She is either alone in her bedroom or with  a trusted girlfriend or, if in public, unaware of what she is showing. 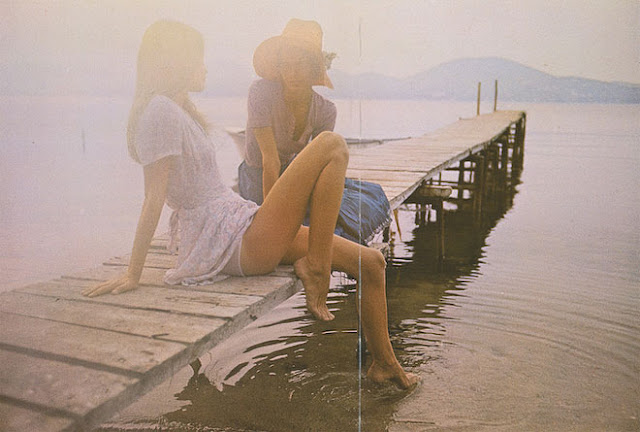 And a whole lot people built a career on that look, from designers, to models, to actresses, to clothing stores. (Added March 21, 2016: Also Penthouse Magazine.)