"This morning he told me that he'd been dreaming about the mountains of Nebraska," said Mrs. Davidson.

He remembered seeing them from the windows of the train when he crossed America. They were like huge mole-hills, rounded and smooth, an they rose from the plain abruptly. Dr. Macphail remembered how it struck him that they were like a woman`s breasts.

From "Rain" by Somerset Maugham

That bit from Maugham resonated with me as a teenager because every time my family drove through the Appalachians  I would sit in the backseat with something on my lap because the rounded mountains made me think of women's breasts. Nowadays not so much. That I once thought that way was more testimony to the power of hormones than anything else. I don't know what Somerset Maugham's excuse was.

But the Appalachians sure are beautiful. 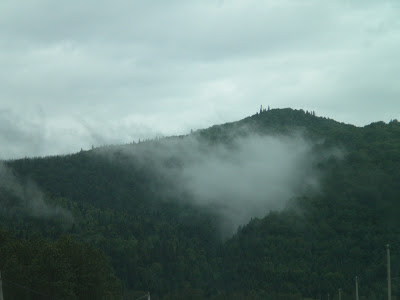 I was driving through them from ten this morning until five this evening. It was breathtaking.

Sometimes westerners or Europeans will come by and say, "those aren't mountains, they're hills." Usually, we answer that they are much older than the Rockies or the alps, and they are, but it's not really the point to make. They are mountains just very different mountains. Spend some time around them and on them and you'll see and you'll learn to love them.

I did see one that was reminiscent of a woman's breast, by the way. It helped that I was looking up at it from the side and trees didn't make it look lumpy. I decided in the end not to try and get the shot out of a moving car. It wasn't the mountain I was willing to die for.
Posted by Jules Aimé at 8:46 AM