That's where I am tonight. It's a mill town in the very northernmost reaches of the Appalachians. It has a vaguely Twin Peaks feel about and I'm in room 13! I hope they have pie.

I've been on the road for nine hours and I have to do the same tomorrow so I won't be posting much. But I did want to share this: 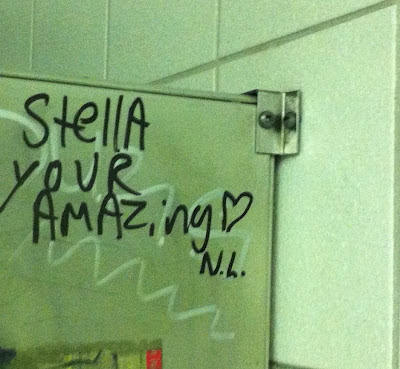 That's from a Greyhound station where I used the men's room. The men's room! I don't know what NL, the author of the above, was thinking. Perhaps he imagines that Stella is likely to come by and notice?

I'm inclined to forgive his saying "your" when he means "you're". But the rest of it is pure narcissism. But what graffiti isn't narcissism?

PS: There was a VC recipient from Cabano. Wow!