They could end it right there. In fact, it's hard to see why they bother going on. Well, expect that ratings are way up and there is apparently a deal for two more seasons.

You caught the clever joke of course. They never name the brand because it hasn't got a name yet. Virginia Slims would be introduced in 1968:

You've come a long way baby. Except they haven't At the end of it all, Don walks into a bar and orders an old fashioned which, of course, is where we see him in the opening scene of the pilot. Peggy is literally trying to get a  cigarette of her own for her new employer. And then she checks into her motel room in Virginia (we know it's "motel" because she is on the ground floor) and she looks out the window and sees two dogs having sex.

Here is the problem, the show itself uses women in ways that are just as unenlightened. I'm not sure that is a problem for the show or for us. You decide.

Consider this bit of dialogue from last night's show:


Megan: I need you right now.
Don: Megan.
Megan: Please. It's the only thing I'm good for.
Don: What the hell happened today?
Megan: This is what you want isn't it? For me to be waiting for you. So you won't give me a chance.
Don: That's not true.
Megan: I know, I know. Because it's either that or I'm terrible.

Okay, nascent feminist theme perhaps? I don't know but stop and consider what the visuals tell us as opposed to the words. For as soon as that dialogue ends, Megan rolls over and we see this: 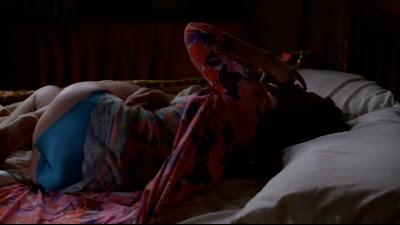 I know, I know, how very crass of me. But Megan's words from 1967 tell us that she is worried that her only value as a woman is sexual and then the camera immediately tells us that the creators and audience think her only value is sexual.

But Don gives her a  chance. Or appears to. He leaves the ad that is about to be filmed with Megan and walks out of a set and the camera pulls back so we can see that there is no fourth wall. And then he walks right into another set. Luckily this is not some stupid post-modernist wink but a lovely existential moment ebcause the very next scene he walks into is a bar.

Where he orders an old fashioned.

I love the show. That's why I write so much about it. But is this going anywhere? Or does it all end with some bit of cheap cynicism about how people can't change.

There were all sorts of fourth wall moments this season by the way.  Did you catch the shot where the partners all walk into the floor above to look at the empty office. That, of course, is nothing but the empty set of the existing office. Here is a gem. Here is the moment in episode "5G" from season one when Adam comes to Don for help and Don refuses: 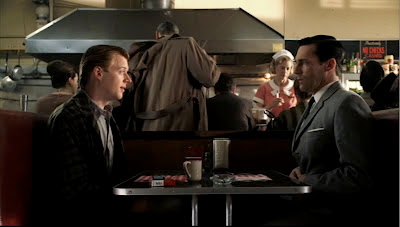 Okay, here is the scene from "The Christmas Waltz" this season when Paul asks Harry for help and Harry gives him help: 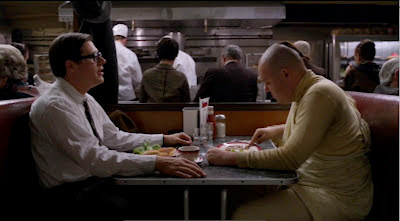 Yes, it's the same booth. (Click on each image if you need to see it larger.)

And now consider this dialogue from "5G" in season one. Midge has called Don at the office and he nips over for a quickie. It's a sort of feminist moment" the woman makes the booty call. Sort of. Anyway, after the sex is over he following dialogue ensues:


Midge: That was it. That was what I called for. You can go.
Don: You can't call me at work.
Midge: You're scared I might get lonely all the time. Start having conversations with you and ring you all the time and say, 'When are you going to come over?'
Don: This is working right now.
Midge: And it worked today. Look, I'm sorry your life is in a million pieces. Be easier for you to have one less.

There is heavy dramatic irony there because Adam is about to take one piece out by committing suicide. Just as Lane takes apiece out this season and, lo and behold, Adam starts appearing in Don's dreams.


"I know, it's hard to watch. But this is what happens when you have the artistic temperament but you are not an artist. Take my advice, Nurse her through this defeat and you shall have the life you desire."

Which is exactly what Midge offered Don and that Megan fears is all she has to offer.  Only Don ignores Marie's advice and tries to make Megan's dreams come true. Don spends a lot of time making women's dreams come true, which is perhaps not surprising  given that most of the show's writers are women.

Back to season one. Rachel has just expained to Don why there has to be an Israel even if she doesn't go there. She says it is more of an idea than a place.

That's pretty much where we are stuck again isn't it? (as I've said before, one of the show's weaknesses is when characters start to talk like writers. This isn't the only time we see a character start unrealistically going off about Greek definitions.)

Here is my thesis. The usual criticism of the dream merchants: as Midge's new boyfriend Roy says in Season one, "You make the lie. You invent want". But suppose we are like Megan, desperate to believe the problem is with Don rather than face that the problem is with us in the first place ('cause it's either that or we're terrible).

Well, what if we are terrible and our desires keep getting us to the same nowhere? If that is true then Don is just a MacGuffin. And we keep trading one false religion for another, episode after episode.