This one's a beaut: 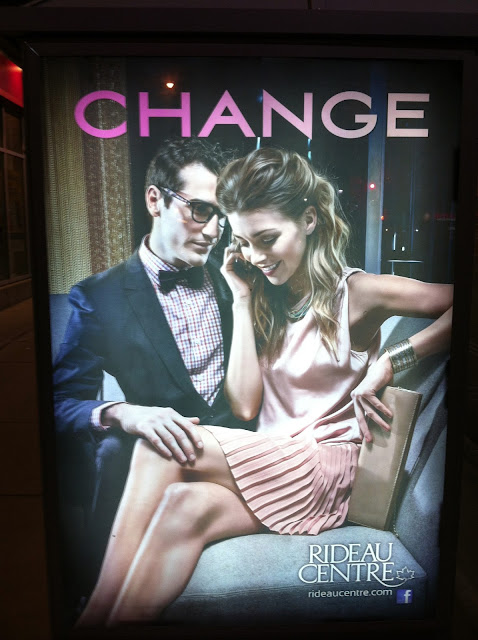 I used to know a woman named Patricia who looked just like her. She is an economist and she told me once that she dreamed of marrying a man who would let her have six children. That's most emphatically not what's going here.

But it's a male fantasy! Men, not women, have this fantasy. That is the thing that is being pitched here. Ineffectual metro-sexual hipster guy looks on adoringly while his girlfriend (notice how careful the art director was to make sure her unadorned ring finger is in this shot, they knew full well this add would not be acceptable to many people if the woman were married) talks to her lover. She looks like she is ready to walk out on him to join this lover if he so much as drops a hint that he is willing to meet her.

Which is what makes this ad so puzzling. The ad is supposed to attract women, they are your prime target for high end retail, and yet it pushes a male sexual fantasy that will have no appeal to women. To be blunt, someone wasted a lot of money on this ad.

(For those of you who don't live in Ottawa, the Rideau Centre is a shopping mall. They have a brand-new Nordstrom's moving in that they are hoping will revitalize their third floor—the third floor being where the high-end retailers are. They can't actually directly advertize Nordstrom's because their other tenants would have a fit. Thus the word "change".)

No doubt they convinced themselves that this is really a women-are-powerful message. The guy looks at her adoringly even though she talks to another guy. But put yourself in her place. Is this the way women fantasize about their own sexual power? It's no stretch to imagine that women in relationships might fantasize about being pursued by other men. But do you think that when a woman daydreams about getting a call from a fantasy lover that she imagines her irritating hipster boyfriend listening in on the call? And even if she pictures herself with multiple sexual partners, do you think she fantasizes that one of them is a total dweeb like the guy in the picture?

You see this sort of thing surprisingly often, by the way. They appear in women's magazines with shocking regularity. Would it be unkind of me to suggest that this sort of ad is more of a reflection of the number of gay men in the advertizing industry than any reflection of the real needs of that advertiser or their intended customer?

So what are they selling? Not much. They got sold in fact.

Here is the perfect theme song for the man in that picture: