Another image: what are they selling?

I can't resist a great title and a blog called "Canada's Excellent Future" has a beauty today:


The Veil and the Bra

It's a story about Islam. The facts are as follows. A Thompson Rivers University fine arts student named Sooraya Graham took a picture of a Muslim woman holding a bra. An employee of the gallery where the photo was to be displayed took it down, presumably because they thought it would cause offense. Outrage followed and the photo is now going back up. "The Saudi Education Centre" in Kamloops has gotten involved, more on that later.

Let's have a look at the photo (I assume, by the way, that this constitutes fair use as the photo is in the news and the copy here is not high enough quality for reproduction. If you own the rights and disagree, please let me know.) 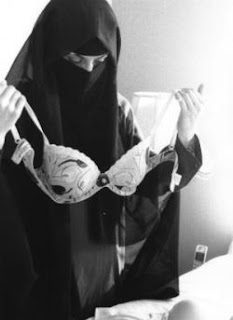 It would be a very different image if the woman were holding the bra up at eye level or if she had turned it around so she was looking at it from the front. The way she is holding it invites us to think about her breasts. She is holding it such that it is placed right where she would wear it the same way a little boy might walk alongside a parade and imagine he is marching in it. It suggests that the woman herself is imagining her breasts in that bra.

All of which makes the artists response in the related news story puzzling.


"I was pretty shocked and I kind of felt my personal space as an artist and a Canadian had been invaded," said Graham.

A puzzling but also a perfectly reasonable response if we think about it. It's a photo of female intimacy. It invites us to consider her intimately. It's odd to turn around and complain about privacy invaded. And yet it's not. We not only take it for granted that a woman might expose and retain her intimacy this way, we strongly encourage women to do this in our culture. And they most emphatically do not encourage women to do this in some Muslim cultures.


"The artist didn't approach the artwork let's say in a very professional way that can state and can clarify the information and clarify the idea behind the picture," said centre president Trad Bahabri.

"Misunderstand" is an interesting word in this context. Someone else, equally offended, might say, with equal sincerity, that the problem is that the photograph is all too easy to understand. Putting a label or a text on it wouldn't help anyone to understand the photograph. We might claim that what the text would really do would do would be to tell people what they are supposed to think. Or, more realistically, the text would tell people what they are allowed to publicly declare about the photo.

And here we have a familiar dividing line between free societies like Canada and repressive regimes like they have in Saudi Arabia. A point that becomes clear if we consider the photographer's response for that response is just as carefully veiled as the woman in the photograph.


Graham counters it's up to the viewer to interpret the meaning, but says she had hoped the photo would show the public that women who wear the niqab are the same as everyone else.

The thing is, each and every level of veiling adds to the eroticism. The bra itself is a kind of veil. And Sooraya Graham's comments are also a sort of veil. When she says she hoped the photo would show us that thew women who wear these veils are the same as everyone else she was very deliberately veiling her meaning. I would argue that what really bothers Trad Bahabri of the Saudi Education Centre is that this veiling is allowed. The paradox here is that oppressive societies that oblige women to wear veils don't really want women to veil themselves. Veiling is pregnant with meaning and the point of the sort of oppression we see in militant Islam is to deny a woman the right to mean anything.

Think of how intimate eyes are. It's a special privilege to look into someone's eyes. When she looked up at you. you would feel that ... somewhere. And is she smiling? You can't be sure. Everything is a tease.