The missing part of the Ashley Madison scandal

Update: The recent revelations that a) women weren't being charged to use the service by AM and b) very few women were using it tends, I think, to reinforce my suspicion that, to the extent that there was anything going on here at all, this was essentially a sugar daddy operation, which is to say a low-level form of prostitution. Not prostitution in the strictly legal sense but definitely in the moral sense. Furthermore, the fact that AM seems to have cared very little about whether their clients got any value out of the product is in line with the ethics of someone who would aid and abet prostitution.

I take it no one is feeling a lot of empathy for Ashley Madison or its subscribers? It's not a business model I want to defend. And yet, there is something rather troubling about the recent threats against the company. To be precise, there are two troubling things about it. Those two things are related.

Here is an interesting line from the statement the hackers released:


Too bad for those men, they’re cheating dirtbags and deserve no such discretion.

That's an astonishingly puritanical statement. It's a long, long way from "hate the sin but pity the sinner". And who appointed these hackers as the moral referees? What if they came after you?

It's not okay to destroy somebody's life because they did something bad or because they have hateful opinions. The increasingly common belief that it is is a very troubling sign about the state of our culture.

The second issue you may have already guessed: "those men?" The inescapable fact about any heterosexual affair is that you need one man and one woman to manage it. Do a little on-line research and you'll quickly discover blogs by women who discovered their husband was cheating. For example, A Year After the Affair. The woman who runs that blog shared an e-card 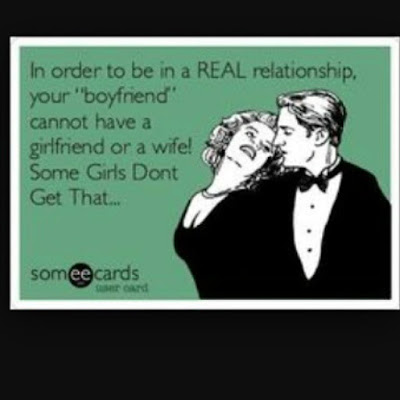 Alasdair MacIntyre reminds us that any morality has an implied sociology. The hackers above have an implied sociology that says that certain kinds of men are evil (I'll get to which kind below). There is also an entire line of feminist thought, starting with Margaret Atwood's The Robber Bride, that argues that the other woman should never be blamed because, again, men are evil. And some people perhaps even believe that. I doubt that most of the people who claim to actually do.

The people who run Ashley Madison have another site called Established Men. It's a sugar daddy connector. Men pay for that service. Women get on for free. I suspect that, while pretending to be something else, most of the Ashley Madison business is the same. The women attracted to both are probably single.

And they're probably younger and more attractive than you'd like to think. "Ashley Madison" conjures up an image. That's not for the men. The men already know what they want and wouldn't be put off by having to sift through a "selection" to get what they want. If anything, that's a plus as it would make finding the woman whose picture gets our guy excited feel all the more special if he had to go through a certain number of "duds" to find her. No, the image "Ashley Madison" conjures up is meant for the women (and girls) who go to the site. It tells them what they are supposed to be like.

There is a female character in a Len Deighton novel who says that infidelity is ninety-five percent opportunity and five percent motivation. For a cheating woman, that's usually true. There is always someone pursuing her—what she needs to make it happen is a situation that makes it easy and safe enough to follow through. She's alone at the cottage mid-week and there is no one else on the lake except her old friend from college whom she's always been curious about and bang, it happens. Quick, easy, no involvement, no elaborate ruse or cover up needed. Most men can only dream of such a thing. What Ashley Madison sells them is the fantasy that they could cheat like a woman.

But for Ashley Madison to work at all you need a whole lot of mercenary women willing to sell sex in order to get money and clothing and good times but who don't want to think of themselves as prostitutes. If I had to guess, I bet there are whole lot more men who fantasize about a ninety-five-percent-opportunity-and-five-percent-motivation affair than there are women willing to be stigma-free sex workers. That said, there must be enough women in that category for sites like Ashley Madison to work at all.

I'd further bet that you could probably put together an image of the kind of guys the site worked best for. They're fairly wealthy and fairly good-looking with weak social skills. Why weak social skills? Because if a guy with money, looks and strong social skills is stuck in a sexless marriage and wants to cheat he wouldn't need any help finding a partner. On Ashley Madison, a guy wouldn't need to actually be wealthy so much as clearly willing to spend a lot of money. Why does he have to be good looking? So the woman won't have to feel like a prostitute. If she's with an unattractive guy she'll be painfully aware of the status hit she is taking be being seen with him. She feels shame, not guilt, at the thought of being a hooker. What she dreads is someone else in the bar seeing ugly guy spending a lot of money to be with hot woman.

But angry puritanical hackers and the rest of us being self righteous on social media aren't interested in shaming her? No we aren't but you probably wouldn't want to think about what it is about you that makes you like that for too long. The implied sociology of your moral beliefs would be too depressing and so might the conclusions you'd reach about yourself.
Posted by Jules Aimé at 3:58 AM