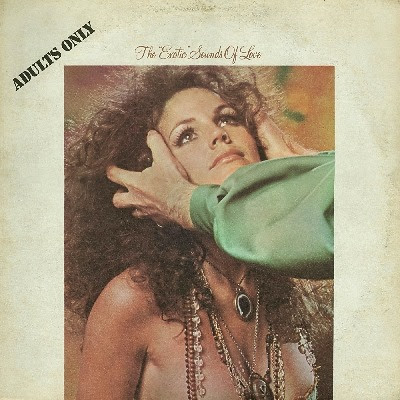 That's from The Exotic Sounds of Love by the 101 Strings Orchestra featuring Bebe Bardon. I don't think Bebe Bardon is the name on her birth certificate. She specialized in breathy recitals punctuated with sounds meant to suggest that she was approaching orgasm. You can listen to the album at this great site, where I got the above image.

Before getting to some music, I want to comment on the image. That's a very 1970s image, which isn't surprising on a 1972 release. I was just coming of age at the time that this sort of photography was so popular so it had a huge effect on me.

The angle of his arm and her gaze tells you that she is on her knees. You can easily imagine two possible sequences following this. One, familiar from many black and white movies, has the man pulling her to her feet and kissing her. The other, familiar from dozens of soft-core porn films, has her remaining on her knees. I was eleven years old when this came out and the only sequence I was capable of imagining was the black and white movie one. As the 1970s went on, I got other ideas and became less and less innocent. In another sense, however, I remained very innocent. For while I could easily imagine a sequence that led to this woman performing oral sex on the unseen man or, almost but not quite beyond my wildest dreams at the time, me, I always thought I was the only one so degraded as to have such a thought.

Later, as I came to understand that these images were intentionally created to plant such ideas in our minds, I remained convinced that only boys—and, more particularly, depraved boys like me—had such thoughts and that it was a sign of how bad I was that I responded to this crass stuff. The now unsurprising fact that nice girls my age looked at the same image and, with equal shame, were aroused by it was something that neither I nor the society of the time was ready to accept. Even now, we hide these things from ourselves, although a lot less than we used to. That theme is the inspiration for this year's "songs of summer".

That said, there is one, and only one, place to start. Paris! There a cynical jazz musician Serge Gainsbourg was asked to help create pop songs for a teenager named France Gall. In 1966, he wrote this song:


It was a huge hit. It's now painfully obvious what it's about. At the time, the whole thing hinged on plausible deniability. It's creation depended on the cooperation of a lot of people.

It's not clear that France Gall herself got the joke. She has always denied that she did and resented it when the meaning became clear. That's possible. More likely, I think she figured out that rather than being in on the secret joke, she was the joke.

That's a recurring theme, we might say a recurring problem, with these songs as we shall see.
Posted by Jules Aimé at 8:29 AM