The commentary on Mad Men is often more fruitful for analysis than the show itself.

Notice for example, how Hanna Rosin saw the exact same show that I reported seeing yesterday:


The broader theme (and it’s a little Phyllis Schlafly for my tastes) is that free love isn’t really free. If you dive into the late 1960s sex scene, then you either come out with a huge hangover (like Joan’s friend Kate) or you’re a total lascivious buffoon (like Megan’s swinger bosses). In the meantime, Don’s brand of adultery is so old-timey it’s biblical, freighted with crucifixes and prayer and long meaningful looks. In fact Don is the peeping Tom of the episode, spying on Peggy, spying on Megan, a spectator to the action going on around him but not really able to participate.

The difference between us is moral. I like the moral point here and she doesn't. Aesthetically speaking, however, we are on the same page.

Two preliminary points, the first of which is going to seem a little pedantic: there are no crucifixes in the Bible. (To be even more pedantic, Sylvia is wearing a cross not a crucifix.) There were, in fact, no crucifixes anywhere until at least the tenth century. It's not Biblical but medieval. And that is tremendously important. The theme here is renunciation. Don says, "I want to stop doing this." (But not yet as Augustine would finish it.)

The second point is the notion of freedom inherent in Rosin's view. She doesn't just want people, especially women, to be free to make their own choices in sexual matters, she wants them to be able to make these choices and have good consequences follow from them. She and I agree that Megan's swinging boss come off looking like idiots. The difference is that Rosin seems to think that is some sort of manipulative twist by the show's producers; she thinks there is a possible dramatization that would be equally, if not more credible, in which these characters come across as fun-loving, well-adjusted people.

The problem, as anyone who ever had the bad luck to interact with them can tell you, is that swingers are lascivious buffoons. This isn't some sort of distortion of reality. It's dramatically credible because that is what people who drain sex of all the things that make it human are like.

The medieval sex that Don engages in is not without its moral pitfalls of course and he certainly isn't without moral failings but it's miles more interesting than anything the swinging sixties had to offer. And it is that because it is human.

Choose your character and then become him or her

The other thing that strikes me as interesting about Rosin's commentary is the narrative arc she wants to see. The show tends to tell the same stories over and over again only with slight variations so you don't actually get anything that looks like the sort of narrative arc you'd get in a novel. Notice, for example, that we already had this Don goes to an exotic land seeking peace in Season 2 and in Season 4. He even walks into the ocean seeking to be made clean at the end of Season 2. That's the way it tends to be in television when the show drags on for season after season and then suddenly stops.

And before you condemn that, ask yourself what is more like real life: the arc with a sense of an ending you find in a novel or the repetition with variations you find in television?

Anyway, what is the narrative arc that Hanna Rosin looks for amongst all this debris? Not surprisingly, it concerns a woman trying to change her life. The woman is Megan:

It struck me that by acting, Peggy allows herself to feel a little less, which is precisely what Megan does in her love scene. That play within a play unfolded beautifully. The first shot showed Megan dressed up in her maid’s uniform lounging on a couch, and because we’d never seen her on set, it wasn’t clear if this was “Zou Bisou Bisou,” Downstairs edition, or what exactly was going on. Then pretty soon Megan (as the maid) was on her back on the bed, with “Rafe” all over her. Her acting dilemma is a real one for the era. I recently  saw the movie Hitchcock, which is about the making of Psycho. It takes place a few years earlier than this episode, but one of its main themes is Hitchcock’s rage about his leading ladies always betraying him because their husbands insisted they quit, or lay off on the love scenes, or button up their shirts. That doesn’t excuse Don’s despicable behavior, of course. But it does create the interesting dynamic that Megan, the youngest of all the adults and the best placed to let loose in the late ‘60s, is practically the only character on this show whose moral compass seems to point true north.

I quote this lengthy bit because I want you to see how much Rosin is on Megan's side.  And why not?

That acknowledged, I think Rosin is missing some serious problems with Megan's moral compass. For Rosin misses the point completely here. The drama is indeed telling us to recall scenes from last year but not the ones that made Rosin feel good.

I apologize for the horrible image quality but Apple won't let you take screen captures in iTunes anymore. You can see enough, however, to catch that the connection the shwo makes is not with the Zou Bisou Bisou moment at the opening of last season but with the fantasy she ad Megan shoots at the end: 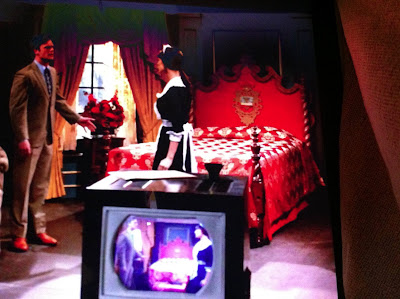 I'm pretty sure that is the same sound stage that they shot last years final episode on. It's vertainly the same set up: girl with unrealistic dreams in a bedroom with a fairytale bed.

And do you remember how Megan got there? Not by earning it but by asking her husband to get her the job and, not incidentally, betraying a friend in the process. And then the camera pans back to reveal Don watching just as he watched the set up for the shoot of the shoe commercial.

The similarity doesn't end there. In last year's finale, a woman walks up and asks Don a question and that signals pretty clearly that he is now bored with Megan. Her childish routine has reduced her in his eyes. This year, a woman Don hates, a woman who represents the kind of sexuality he hates, walks up and whispers, "You like watch, do you?" It may be that, more than anything else that puts him off.

Don likes to do sexual things in the dark by subterfuge and seduction and not by mutual consent that has been carefully negotiated in the light of day. That shouldn't be a surprise, my bet is that Hanna Rosin much prefers the same thing no matter what she might say or even think differently.  In any case, I'm pretty sure Don got some pleasure out of watching in the dark until that damn woman came along and ruined it with her pandering.

Either way, Megan has lost something by trading a business partnership with her husband to pursue fantasy dreams. And that matters because ... continued tomorrow.
Posted by Jules Aimé at 2:52 PM