If you like your irony to be about as obvious as a slap in the face with a greasy fish and your moralizing trite and obvious, then Percy Bysshe Shelley is the poet for you.

And that is why Ginsberg quoting from Ozymandias is a problem. Anyone who knew the line well enough to trot it out on command would already know it is ironic. If you follow Stan's advice and go read the rest of the poem you'll discover that you don't need to read the rest of it because the irony is already obvious before you get to the line that Ginsberg quotes.

And the episode is called "Dark Shadows".

And it's got Betty in it.

"But you hate Betty!" Maybe, but I don't hate her nearly as much as the screenwriters do. There is a moment in this episode where Megan teaches Sally how to cry. She tells her to keep her eyes wide open and think of something that makes her sad. Well that's how the scriptwriters crank out Betty's parts, they keep their eyes wide open and think of some woman who treated them badly.

I love Roger though. Did anyone else look at this sketch 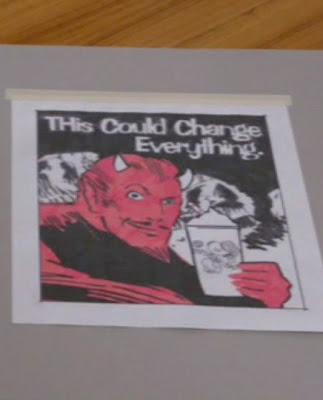 and think of Roger? It's a perfect Roger line in that nothing ever changes with Roger but he is always promising to change everything. You can just imagine Roger in the garden with Eve telling her that eating from the tree of knowledge of good and evil will change everything. Except we don't have to imagine because it happens to poor Jane who ends up learning that knowledge of good and evil means looking at your new apartment and tasting the ashes in your mouth.

I love Roger. By the way, notice that Roger tends to charm people by telling them the truth and not by lying to them. When Roger asks Ginsberg to help him come up with an idea to pitch the Manischewitz people, Ginsberg cynically assumes that Roger will present them as his own ideas but when he is with the potential client, Roger cheerfully owns up that that he had the creative people come up with some ideas so "I could show you what we are capable of". The devil is a team player.

Rivalries
This episode was reminiscent of "The Summer Man", although not nearly so brilliant as that episode because it was rivalries that drove everything. Don goes into the office where Ginsberg and Peggy work and sees the subversive stuff Ginsberg has drawn up and that inspires him to try and match the guy.

By the way, the folder labelled "Shit I gotta do" is a false note. That is what someone would do in 2012.

But back to the moment. We've had a whole lot of set up beginning with Roger explaining to Bert how fishing is a competitive sport, not man versus fish but man versus man. And then we get a whole lot of male posturing. And then Joan shows Don a lot of work going into a portfolio and complements him for putting together "a lot of voices" in the creative department.

Okay, next Don goes into the office on a holiday and then he stands up and for a full 15 seconds we get a seemingly pointless shot in his office of him standing, lighting a cigarette and stretching in his office. Except that for the entire shot we can see Don's semi-erection which is clearly visible through his pants. Don't believe me? It starts at 5:15 on the iTunes version of the episode. It's not an accident. It's right in the centre of the shot.

Then Don walks down the hall and goes and spies on Ginsberg and then he goes back to his desk to prove he still has it.

And there is a rivalry between Betty and Sally that Sally, thanks for small mercies, wins.

As Woody Allen once parodied Hemingway: It was a good episode but not a great episode.

Final thought, the writers themselves are better of far better use of irony than Shelley. There is a lovely moment when Henry is having his midnight snack and talking to Betty and says,


"I bet on the wrong horse Betty."

Now it's off to see what other people thought.
Posted by Jules Aimé at 10:41 AM

Email ThisBlogThis!Share to TwitterShare to FacebookShare to Pinterest
Labels: Made Men, Season Five