Mad Men: Commenting on the commentary

Not just meta but meta-meta.

What do they teach kids these days?


It seems that her Majesty’s Tax Man has come calling, and Lane has turned for assistance not to H&R Block, as you or I might, but to a suave but insistent British gentleman who puts on a tuxedo to make a transatlantic call. 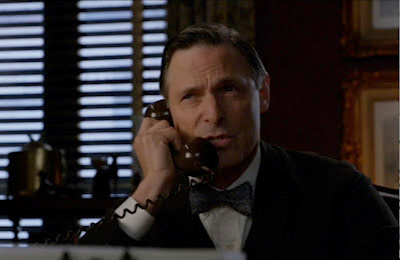 Now, it might actually be a tuxedo but I doubt it very much. First hint, that is a patterned bow tie. Second hint, his shirt has plastic buttons and not studs. He's just a well-dressed solicitor wearing a bow tie with a suit that was cut to flash a little cuff.

UPDATE: We can see this quite clearly when the same character appears wearing a different colour jacket that shows up better: 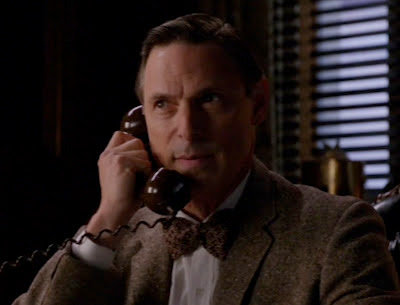 Does this matter? I mean, does it matter a lot as it obviously does matter? Well, that will be a subject of some discussion over the week. I have promised to go on a lighter note for summer and this is the beginning. I'm going to be looking at the recap community a bit this week.

To answer my own question, yes it does matter. If you are going to be a cultural critic, you should be possessed of some culture and my point this week will be that these people aren't. They are Google and Wiki fiends but they don't have much cultural depth and that is why most Mad Men recaps are so pathetic.
Posted by Jules Aimé at 11:07 AM