How many deaths does it take to count as a "toll"?

Crazy over-dramatic headline of the day comes from the CBC. Where they should have written, "Second death on BC sawmill fire", our taxpayer supported broadcaster came up with this: 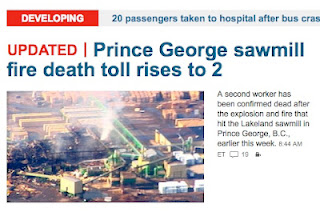 That's sort of like saying "Village population doubles as second resident moves in".

The question though is this: Is this just incompetence or does it tell us something about the deep cynicism that prevails at the CBC that these things mean so little to them that they couldn't be bothered using words correctly?