Ralph Lauren Magazine has a piece up with a subhead that reads, "Why preppy style was always about breaking the rules—not following them." That's not crazy talk. There is something right about it. As I was writing yesterday, wearing boat shoes without socks was a kind of rebellion. But is Ralph Lauren selling rebellion today? 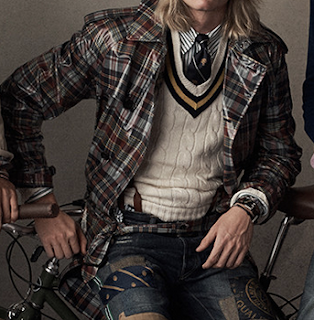 It looks like he is breaking rules all over the place. He's wearing a Madras jacket with patchwork jeans along with a tennis sweater over a striped shirt with a tie and suspenders over the sweater. That should be chaos. If you owned similar items and just put them on, the result would be chaos. It's not chaos in that picture because skilled designers have worked very hard to pick colours and patterns that would complement one another. Notice how gold, blue and burgundy repeat throughout and how the patchwork jeans echo the patch-like effect of the madras. That may look like a bunch of items a prep kid might have pulled out of his closet but it's actually the furthest you could get from the preppy spirit. There are only two ways to get that look: 1) either you invest a lot of time in learning design rules and following them or 2) you buy all those pieces from Ralph Lauren where designers who understand the rules. A look that was created by kids rebelling against parents has become a look designed to make you childishly dependent on Ralph Lauren.

Let's consider some Thomas Aquinas for he is obviously germane to the issue of prep.

The key issue  is the bit I've highlighted. Leaving prudence aside for the moment, it seems to me that you could not come up with a better description of the relation between Ralph Lauren and preppy than to say, RL has a kind of kinship that is not a true but a spurious likeness to preppy; thus in opposition to preppy we have identity. I want to be a "rebel prep" so I go to RL and buy rebel clothes.

"Identity" is a tricky thing. At first glance, you'd think that identity is a source of security. This identity, whatever it might be, is something I own and therefore have a right to. Look around a bit, however, and you will see people desperately fighting to defend their identity. No matter how certain you feel about your identity, you need other people to assent to it. Thus all the concern about pronouns in the trans debate.

Preppy, to begin with, was just the way upper middle class people on the Atlantic coast dressed when they were on vacation. It was the face you put forward for your inner group. Back in the 1970s there were regular Thanksgiving gatherings of my mother's family in Cape Cod, Prince Edward Island or Notre-Dame du Portage. The location shifted back and forth between where her various sisters were summering. About thirty of my cousins would gather and  there was an undeniable family resemblance in both the people and the clothes they wore. Then we'd go back to school and all feel a little odd because those clothes we wore weren't quite right. We stood out. And not in a good way. There was nothing glamorous about us.

Ralph Lauren was a Jewish kid who grew up in the Bronx. He craved glamour. He studied it and made a lot of money selling what he took to be glamour to others. He didn't just sell clothes, he sold a set of rules about how to dress to get the look. This is not rebellion but high-school-style peer pressure applied through advertising.

Those of us who dressed "prep" before it had a label in the 1970s represented a way of life that seemed like it was on the way out. Everybody seemed to agree about that. Every night television news showed a new world taking over. It's hard to imagine now but every hair stylist and clothing store had a sign in the window that said "unisex". I remember reading a column by Robert Fulford in this period where he predicted that art would replace religion and clearly delineated differences between men and women would disappear. The notion was that men and women would  have their haircut the same way and wear the same kinds of clothes. It was complete nonsense, of course, in very short order women figured out that wearing the same jeans their boyfriends wore wasn't flattering and men figured out that getting the same haircut their girlfriend had was bloody expensive and required a whole lot of maintenance to no real end. On the other hand, girls at my high school figured out that the jeans could be fairly flattering if only you wore them tight enough. They also figured out that they could wear the same T-shirt as all the guys but make it very clear they were girls by not wearing a bra.

For the people pushing this revolution it didn't matter so much whether the new thing worked. What they wanted was the destruction of the old. All they succeeded in doing, however, was to create a backlash. The backlash had no unifying principle. The late 1970s saw the rise of punk rock, lingerie stores, nerd culture and preppy. The only thing they had in common was that they had no intention of being swept aside.

So, yes, preppy was always about breaking rules. In practice, however, breaking rules is really a matter of choosing a different set of rules. Contrary to the cultural elite who favored a world where the rules were constantly changing, a world that, not incidentally, favors the cultural elite, preppy rebels wanted rules that suggested a certain permanence.
Posted by Michel at 9:09 AM