What is this selling: 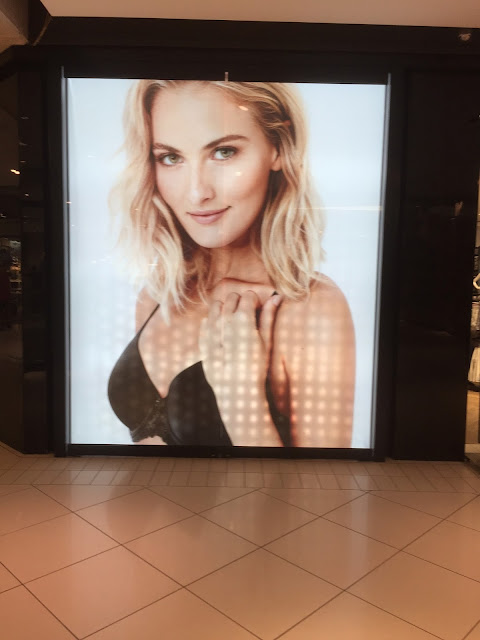 It's part of the display outside La Vie En Rose lingerie store here. In a sense it's obvious. This picture is selling a bra! Except that it's a lot more complicated than that.

For starters, the focus of attention is her face. I'm incorrigibly heterosexual and yet I don't look at her breasts when I see that picture. I look right at her face. I don't have to force myself to maintain eye contact. To the contrary, it's her eyes that keep pulling you up. You'd have to force yourself to look down. That seems an odd way to sell lingerie.

That's because it's not selling lingerie directly. What you see here is the equivalent of the sporting goods store that offers free skateboarding lessons. That picture is a free lesson in how to be sexual for women. You look at that picture and try and duplicate the look she's giving.

Go ahead and try it!

As Wittgenstein says, it's interesting that we can imitate a facial expression without having to check in the mirror to see that we've gotten it right. And you can do that, man or woman, with that photograph.

There's a feeling that goes along with that expression. Do you feel automatically feel it when you make the feeling? Or do you have to be able to get the feeling before you can make the expression? The model could tell you. It must be interesting to make your living "turning it on"  for photographers you feel no attraction to. Then again, a lot of women can do that.

Being sexual is not a magic bullet. You can't turn it on for just the person or persons you want to. Some women find that an unbearable burden. I feel their pain. Then again, that's just the way it is so deal with it.

The trans community can tell us a lot about this. People who believe they are women born in a man's body have a term for the quality the woman in the photograph above has. They call it being "fishy" and a person who has this quality is described as a "fish". To attempt to be a "fish" and fail is to be a "brick". I know what you're thinking and you're right: that's not very nice. I would never talk about other people that way but they're talking about themselves.

Anyway, that picture is a lesson in how to be a fish. It's not aimed at the trans community. At the same time, I'm sure members of the trans community would be welcome at this store. The pitch is aimed at biological women because there are a lot of them.

That picture is also a lesson in the deep differences between men and women.