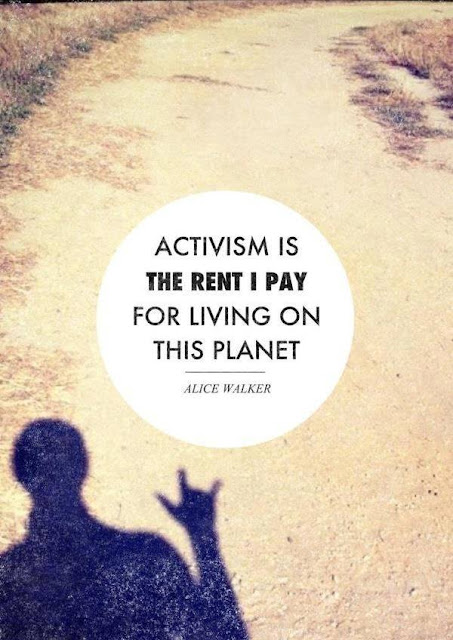 We shouldn't necessarily blame Alice Walker for this.  There are hundreds of quotes floating around the Internet that are attributed to be people who'd be surprised to find they'd ever said such a thing. What matters is not what she did or didn't say but that someone thought it was worth making into this graphic and then many thousands of people, including a "friend" of mine, thought it was worth sharing on Facebook.

Let's start with a hypothetical. Suppose someone owed you money or wanted to buy something from you. Under what conditions would you accept payment in activism as opposed to cash? That's not intended as snark; there might be conditions under which you would. Here in Ottawa, unions provide free meals to get unemployed residents of downtown to take part in protests. They've done this for decades. There might well be a case under which you'd take someone's activism as payment.

It would have to be a cause you believed in. So, who is accepting the payment in activism  implied under the scenario presented above? You pay to "the planet". This is a religious notion (we may as well say the goddess Gaia") And it's a pretty tight circle: you pay to "the planet"in return for "living on the planet".  Notice how casually the practitioners of this religion assume they know what the planet wants. Or is it what the planet needs? Who exactly is the god or goddess here? Who is the humble giver and who is the benevolent deity? It should trouble people a lot more than it does that the distance between the two vanishes the moment you actually ask the question.

This sort of religion should also requires purity for it would necessarily taint the whole thing if, in addition to giving to Gaia, you were also collecting actual cash for your activism. And yet everyone knows, or should know, that the most prominent activists and celebrities are collecting money or other considerations such as publicity from various foundations, charities or unions for their activism. We comfort ourselves with the notion that even if the organizers of a protest are collecting paycheques, the people in the streets on the day of the protest are not. And perhaps we imagine that, while they are paid, the organizers and celebrities aren't as well paid as they would be for a real job. In some cases that comfort is genuine but there are enough cases of people getting wealth and fame out of their activism to give us pause.

The religious aspect also allows activists to mask a certain blunt reality about being an activist from themselves and others. For to be an activist is really just to be a protestor. The activist always imagines that someone else—either an existing or future government—will actually pay the bills and do the work necessary to make the desired goodness a reality. In the final analysis, activists don't actually do anything except be activists. Why they don't simply become politicians, set up a charity or just go out into the world and do good? If you actually want to make things change, that is the way to do it. The answer to those questions is that all activism is really a confession of impotence. To be an activist, contrary to all surface claims, is really an acknowledgement that you don't have the ability to change things and that the best you can do is to cajole or pressure other people into doing it for you (and the fact that it's really "for you" is why it's so handy to have an idol like "the planet" to keep it looking quite as selfish as it actually is). Activism is also a confession of political impotence—that most people don't support your cause—for the hoped-for effect of having "all those people" out in the streets protesting is to convince the many more who don't care so much that there is an active social movement that had better be mollified before there is social unrest. Finally, activism is also a confession of intellectual impotence for a good argument doesn't need a mass of protestors to have effect.

Is the image above, then, selling nothing at all? Yes. For the nebulous claim that "activism" has worth, that it pays the rent, is a form of justification. It's purely self-justification but put the way it is above, it feels like it isn't. Well, it shouldn't. The only person who could be convinced by such an argument is a narcissist.
Posted by Jules Aimé at 8:46 AM