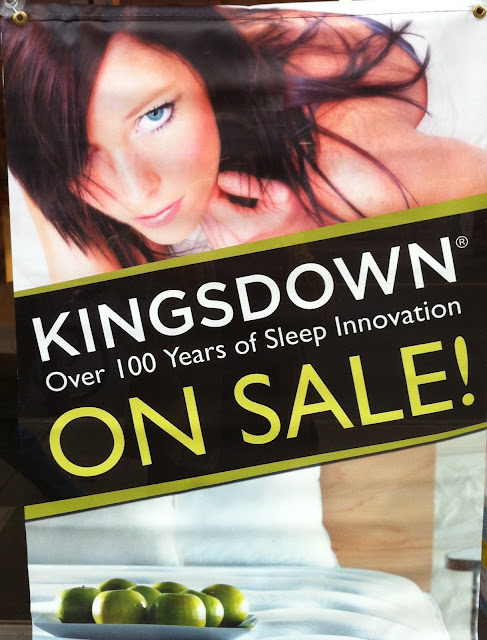 I think the apples are a nice touch.

The other key elements in the shot are her left hand sans wedding ring and her panties which are "purple", which is to say one of the hundreds of possible shades between red and blue. A woman would have a more precise name for the colour, she'd probably say it was a deep shade of violet. Purple panties scream "very sexual woman" to a man but, and this is really important, this shade of violet does it in a non-trashy way.

Note to women: if there is a guy you know who thinks about you in a sexual way and you like it even though you both know that actual sex is out of the question, this is the colour to give him a glimpse of down the front of your shirt or just peeking above the waistband of your skirt or pants. And that too is essential for this ad to have the desired effect. It is inspiring the man to fantasize about sex with a very sexual but not trashy woman who isn't his wife.

The ad is selling mattresses by the way. And it's selling them to men which is unusual. The vast majority of ads selling mattresses are aimed at women. That's why the bowling ball is dropped on the bed in the famous mattress ad. You can tell that this ad is an exception to that rule because the woman is wearing panties. That's what men want women to wear to bed. Maybe with a T-shirt or nightie but always wearing panties. No woman would wear sexy panties to go to bed if she was planning to sleep.

By the way, why is the bowling ball so important? Because women don't sleep well. They never sleep well and a new mattress isn't going to change that but she'll convince herself that the problem is either the mattress or that in combination with the guy in her life shaking the bed. The pitch for women is anti sexual. She wants an image that is clean and antiseptic: the bed is definitely not rocking!. The still life of apples in a shallow bowl (emphasis on the "still") that you see below the band across the centre of the image, that's for her. (Notice, by the way, that the model's legs are not visible below that band. The wife sees the woman, thinks her husband will enjoy this too much and plans to tease/mock him about it later, but the still life below the band is what she thinks about when she pictures this new mattress and she doesn't want that sexual image above intruding on it.)

It's very important that this ad is in the window of a mattress store. It would be pointless to put this in a magazine or catalog. It's aimed at the guy who is reluctantly following his wife or the woman he lives with (same thing) into the store. He'd rather be almost anywhere else and that POV shot is going to remind him of one of the many things he would rather be doing than mattress shopping. It's in the window of the store because his wife wants a new mattress and he doesn't so this is a good time to remind him that people do things other than sleep on mattresses.

I know, that's all pretty grim but that is the reality it's based on. Your a man, your wife isn't giving you what you want because she's more interested in a solid night's sleep and she thinks you're the problem. There is absolutely nothing in this new mattress for you but this shot will give you hope. It gives you a positive image to think about during this shopping trip and that will make it easier for you to get through and more likely that your wife will actually pick a mattress to buy during this trip to the store. Yes that is a grim thought but it's very good advertising.
Posted by Jules Aimé at 6:28 AM