How appropriate that it is Ginsberg who diagnoses the pathologies gripping the firm. Ginsberg is an old soul himself, who is both fascinated and repulsed by the sex-and-violence decadence of his era. What inspired his breakthrough on Jaguar? It was Megan’s actor friend, performing an impromptu audition for the campaign by crawling, panties bared, across the conference table—another nod at the conventions of striptease.  “I could be in a bikini,” she brainstorms lustily, “and you could paint my body with spots.” Knockoff the grabass, indeed.

Okay, but consider this. Here is what the guys in the boardroom are seeing: 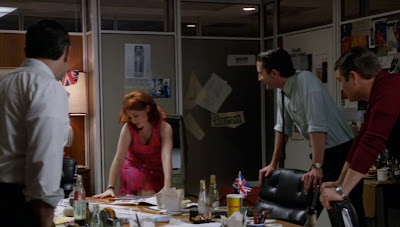 And here is what we the home audience are seeing:

Ginsburg says, "I kept imagining the asshole who is going to want this car." Radden-Keefe says "he does not mask his contempt for the "intended audience". Fine, but what about the intended audience for, as the Internet creeps like to put it, the upskirt shot above? How "appropriate" is it for us, the assholes who want to watch this show, to feel superior?

Consider this dialogue between Pete and Joan about the Jaguar representative who wants to have sex with her in exchange for his good word.

To which the obvious response should be, "So are you, honey." Pete wouldn't, couldn't say that but I'd feel a lot better about the episode if I thought the irony here was intended. I'm not convinced that the show's creators get it; Radden-Keefe sure doesn't.

As I said in my first commentary on the episode, I think there is something morally hollow about it. And it is characteristic of the entertainment industry to imagine it is "diagnosing" pathologies that are actually typical of shows like this.
Posted by Jules Aimé at 7:54 AM