I like Lileks. I like him a lot. And he gives quality stuff away for free and has been doing so for years. So please don't take this as an attack on him. Rather, this is just a comment on going for the easy putdown because if I can't grasp the point in two seconds then there isn't one. I'm sure I do the same myself.

Here is the photo he comments on (link here): 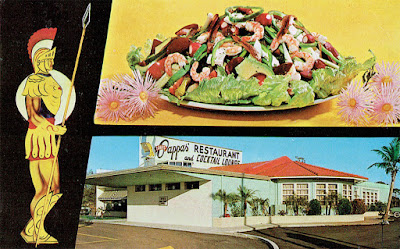 And here is the comment: "Interesting roof projection; seems to serve no purpose except to make sure ABSOLUTELY NO LIGHT gets into those tiny slits."There are two typos in the original, which suggests that he dashed it off. Again, that's perfectly fine.

That said, have a closer look.

You can see that the overhang carries on past the wall to the left and you can see a walkway that likely goes to an entrance that is not visible at this angle. And you can see two arrows painted on the pavement. So it does serve a purpose. It enabled wives and girlfriends to get out of the car and walk to the entrance without getting wet on rainy days.

It's a reminder of something that we've lost. When going to restaurants men used to drop women off at the entrance and then go park the car. That was considered a courtesy back in the day.

"Those tiny slits" are clerestory windows inspired by the King's Road House, built in 1925. The idea was that you put them on the North side of the house and leave the other sides for bigger windows. It lets some light in while preserving privacy or minimizing heat-losing glass on a side that wasn't going provide much light.

Here's another example from the early 1960s. This is the Gorman house in Ottawa. It was built for some friends of my parents. 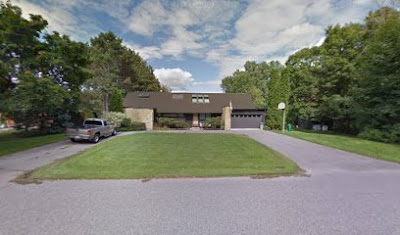 If you were lucky enough to be invited into that house, the entrance hall has a low ceiling, with a stairway to the second floor on the right. As you continue back, the house opens up spectacularly. The ceiling is much higher and the entire back wall is windows. It's a wonderful house.
Posted by Michel at 12:13 PM