Another image: what is it selling?

The usually sensible Ann Althouse got all worked up about this: 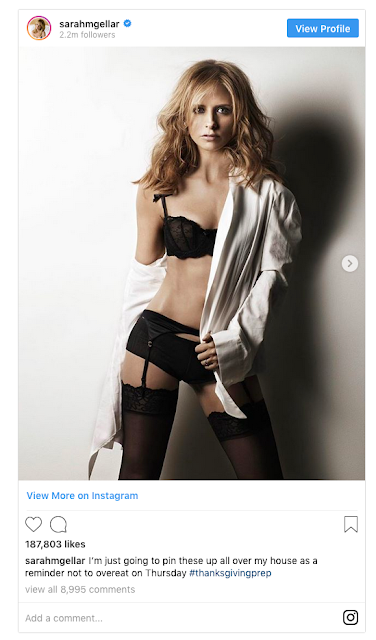 Althouse has two kinds of comments to make about it. The first is that it's "thinspiration". And that it is. Gellar was using the photo to remind herself that staying thin is important to her. Is here something wrong with that? I do it. You pretty much have to in our culture because it is so easy to overeat. There are so many people encouraging us to just let go and take it easy. To stay thin, healthy, fit as well as to keep learning and developing is a struggle; that's why some people are better at it than others and some people are abject failures as men or women.

The argument against it, and it's not clear whether Althouse agrees with this argument or is just drawing our attention to it, is that people with eating disorders also use thinspiration. Uh-huh. Can we pause a moment and consider just how crazy this is.


Don't show pictures that show people drinking because some people are alcoholics.

And how far is from there to:


Don't show pictures of babies in Pampers' ads because it might appeal to pedophiles.

Yes, we are all required to set an example but to whom? You can only set an example to people who are capable of learning from a good example. People with eating disorders are victims of a mental disorder not victims of society.  It doesn't matter what you show them, they will process it as an excuse to not eat. Show a picture of a woman  who is comfortable with her normal body to an anorexic and they will look at it and think, "I'd better starve myself some more so I don't turn into a fat pig like her."

Irrational means irrational. Don't waste your life worrying about how irrational people might interpret  your words or actions.

The one argument that Althouse does take ownership is this one:


I should be clear about what I personally find awful about Gellar's photo and caption. She just doesn't look happy. She looks like someone who's trying to look good for somebody else and is getting no pleasure from it herself. And she's wearing "pleasure" clothes. But she's wearing them for somebody else, not herself, apparently. It's sad.

I can see a tiny bit of that.

Here's the first thing to note about it: it's a posed picture. You can't see into Gellar's soul through this photograph! The picture was taken eleven years ago for a lad magazine. The readers associated Gellar with her role in Buffy the Vampire Slayer so she's posed as if confronted with something scary and challenging. I leave it to you to figure out what male sex fantasy that might feed into.

She's feigning a feeling for the benefit of the viewer. Is that awful? You can reach your own conclusions but you're cutting out a whole lot of good sex if you disallow role playing.

But maybe you're thinking it's okay to role play, dress up et cetera but only when you're doing it for yourself. That seems to be what is behind Althouse's comment, "She looks like someone who's trying to look good for somebody else and is getting no pleasure from it herself." The argument at play here turns on identity. It isn't an explicit argument but an implied one. Let's spell it out. How would it go? I guess something like this:
Is that credible. Suppose I really do have an "identity" that I and only I have a privileged access to. If I sometimes act in ways that are not in accord with that inner identity, do I lose it? Is it so fragile, so vulnerable that it must be protected?

Going back a step, do I and only I have access to my real identity? Most of us would not allow that. I can hide what I am really thinking and feeling sometimes but a clever and sensitive person can figure it out. Not, as Althouse imagines she can do, by looking at a single photograph but by studying a person's actions over the longer run. From that perspective, we might ask more questions about this photo. It's not just any old shot but one Gellar did for a spread in a lad magazine. Why did she do that? Well, it might have been just for publicity but she still has the photographs ready to hand eleven years later!

There are lots of good looking women in the world. But it's bloody hard work to be as good looking as Gellar is and to be that way on command. It's also bloody hard work to run marathons, to lift heavy weights and to become a law professor. Looking good for men is a challenge and it calls for suffering. No one makes women do this but ... well, there is the problem. If a woman is willing to make the effort she will get a lot more attention, approval and acceptance from men than she would otherwise. And she'll get this from all men, including those who have zero chance of having sex with her. And we all crave attention, approval and acceptance. The paradox is that you only get it if you give it. Men give attention, approval and acceptance to women who think men are important enough to be worth looking good for. People who run around seeking attention without treating the people from whom they seek that attention as worthy and important are very tiresome people. We respond to givers. We respond to people who care enough about what other people want to give it to them.

When a woman makes a gift of herself to the world, we men are grateful. There is a woman who catches the bus at the same stop I do just after eight every morning. She is like that. I've never spoken to her. Sometimes she give me a smile of recognition and I love that. If this goes on long enough, it might get to the point where we start saying, "Good morning." Or not. If I were her age, we might become friends or more. But none of that need happen. She recognizes that she has a gift and she shares that gift and the world is a better place for her being in it. That is not a small thing. She doesn't do it just when she feels like like it although I'm sure there are days she schleps around the house in sweats and feels good for not having to make the effort but the only person making her make the effort other days is herself.

The distinction between "doing it for herself" and "doing it for others" doesn't exist. Doing it for myself is an illusion. We are social beings. My real identity is a social fact. It's not a special thing I keep in a lock box that I can open up in private and that everyone else has to accept because I am the only one who gets to say who I am. My identity is a matter of social agreement. I strive for something but my success is dependent on the agreement of others. Which others I look to for confirmation is an important decision. On the one hand, I don't want to pick people who have an interest in tearing me down. On the other hand, people who will prop me up in my illusions are also bad for me. It's tough being a human being. Bottom line: High quality people always think about what others want and need.