He peered out at the audience at the Aladdin, spotted Dean Martin at a front table—and suddenly experienced what he would call "my nightclub epiphany."

Anyway, here's what Pryor thought looking at Dean Martin looking at him.

I imagined what I looked like and got disgusted. I gasped for clarity as if it was oxygen. The fog rolled in. In a burst of inspiration, I finally spoke to the sold-out crowd: “What am I doing here?”

Then I turned and walked off the stage.

That's pretty impressive. Pryor doesn't unfairly attribute any racism to Martin as a modern social justice warrior would do. It's actually a straight reaction. He implicitly respects Martin. It bothers him that such a man as Dean Martin would see him in a way that he, Richard Pryor, knows to be false.

I knew I had some Dean in my collection. A quick search came up with 6 albums featuring him. Four were Christmas music and a fifth being a collection of cool, swingin' vocalists. The sixth was this one:

That's courtesy of Allmusic. The review says, " This Time I'm Swingin'! was a good, confident set by an artist who had figured out how to make competent albums without expending a lot of effort, which was a key to his charm."That's about right but it's an odd thing to say about an artist. Martin became a star because of his persona and not his talent and not because of his artistic vision, whatever that might have been. He was, and remained, a comedian, a great straight man, who happened to have a beautiful singing voice. That's who Richard Pryor saw.

This was not a man who was going to judge Pryor. He was cool with him. "You be what you want to be and I'll laugh because you're funny." Pryor reacted the way he did because he realized that he, Pryor, was unhappy with the who he was being for the crowd at the Aladdin.

I was one year old when that record came out. I think my parents owned a Dean Martin record but it wasn't that one. I'm sure they would have liked that one. The sort of effortless grace that stars Dean projected  in the 1950s was very much the style they aspired to. Here's my mother and me out in front of where we lived in Ottawa's Glebe that year. 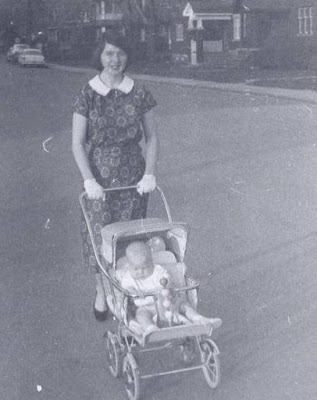 "The Glebe" probably doesn't mean much to people from outside Ottawa. For years, it was the neighbourhood for people who aspired to be upper middle class in a cool way, as opposed to people who wanted to be part of the establishment. An insult from the time called people like my parents, people who came to the political capital to do good and stayed to do well. And there is something to that. They were young liberals who meant to change society in ways they thought for the better but they also some themselves as people who were among life's winners; they would end up, not rich, but comfortably well off.

That we lived where we did that year shows a rather brash confidence. Economically speaking, we didn't belong in the Glebe at the time. My parents were renting that year and probably paying more than they could afford. But they knew they belonged here. If they had been in a nightclub where Dean Martin was performing and he looked at them, their answer to Pryor's question, "Who's he looking at?" would have been positive. They wouldn't have been fully satisfied with what they would have imagined but they wouldn't have cringed either.

The next fifty years weren't easy but the overall trend was always up. After retiring, they moved to the east coast and there was an ocean view from every floor of their last house, even from the basement. They were never rich but they got to comfortably well off. They did well.

Neither was a terribly giving person. I don't blame them for that. They, in turn, had parents who were not very giving. That's understandable; they came from families that had climbed out of hardscrabble existence to become middle-class professionals. Much like the stars who created the cool style they emulated, there was actually a whole lot of hard work behind the outward "effortlessness" they projected. They'd learned to swim by being thrown in at the deep end and they had the contradictory goals of seeing their children achieve the same kind of success while sparing us from the trauma they had experienced. I'm tempted to say, "that didn't work" because looking at people I grew up with there is a lot of failure, especially marital failure. On the other hand, most of us ended up better off than our parents were at our age.

Something important has been lost. I can't imagine a rising comic looking at an aging pop star from the 1990s and having the sort of epiphany Richard Pryor had looking at Dean Martin looking at him happening today. The difference is not that Dean Martin was a great human human being and 1990s popstars weren't. Nor is it that the culture Martin came from was superior to that the 90s stars came from in every way. Look at a list of popstars from the 90s and you'll be struck by how many of them are women. But there was something about it that we've lost and would be worth getting back.

What is that something? I think the answer lies in the word, "swinging". Nowadays, that word means married people who live a lifestyle that involves having sex outside marriage. Back in the day, it meant a style of performance. More on that to come.
Posted by Michel at 10:07 AM