Rude question: What's the difference between a twink and an incel?

I posted about twinks two days ago. Walking my dog later, it struck me that, physically, twinks are very close to incels. The are small men with little muscle or hair. Men who don't look or act manly.


Troy Sivan is gay but this is a very heterosexual video aimed at teenage girls. His being gay isn't an obstacle because the whole point of this sort of thing was perfectly explained by The Simpsons years ago: 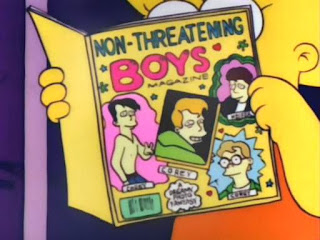 If you're a teenage girl just starting to think about love, there is no less-threatening choice than a small and weak gay man.


And there is nothing new about this. Here is a song that is widely condemned for it's misogyny. Pay close attention, though, and you'll notice that it's actually a very girly song. The attitude you see on display here is of a teeange girl afraid of getting hurt mentally rehearsing how she's going to deal with a breakup before such a thing is even a possibility.


It's a bitchy song about one girl who is afraid of everything: she's afraid of the boys who really want her and she's afraid of the mean girl who will steal that boy from her. That's the attitude that drives the song. That's why millions of girls bought it back in 1965. Nothing has changed. Don't believe anyone who tries to tell you differently.
Posted by Michel at 9:43 AM

Email ThisBlogThis!Share to TwitterShare to FacebookShare to Pinterest
Labels: Wolf