What is this photo selling? 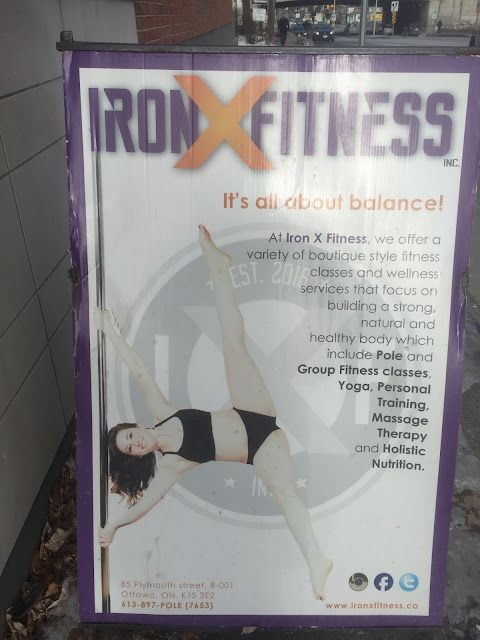 I'll grant that this one is not subtle. But I've come here to make a serious point and not to sneer. Iron X Fitness are a small, local company in a very competitive market. I don't know anything about them but I'm pretty certain they don't have huge amounts of money to spend on advertising and they have to reach a divergent audience with that limited advertising. They aren't communications experts and they don't have the deep pockets it takes to hire that sort of expertise. I think they've done a pretty good job.

"It's all about balance!" And "building a strong, natural and healthy body." They don't mention being able to spread your legs really wide but they hardly have to given that photo. If you check the company's web page, pole fitness is far and away their most popular offering and their clients are overwhelmingly women. There is a market for this stuff.

That it's about sex is pretty obvious but it isn't about sex the way you might think it is. Let's clear out some more of the obvious stuff. Everybody knows that pole fitness has its origins in pole dancing and that pole dancing is what strippers do. And you don't need to look at a lot of photos of women doing pole exercises to figure out that it's all about erotic display. Oh, and did I mention that its called Pole Fitness? But it isn't about getting sex. Fitness and appearance for women is rarely about getting sex. Most women know what they have to do if they want to get sex.

But suppose you asked a different question. Suppose a woman was perfectly happy with the sex she's getting and who she's getting it with but she'd like to think that she could, if she wanted to, get some guy of fairly high status to pursue her and, once she was in bed with him, really blow his mind. She almost certainly she won't actually do it but ... . That's not a question about sex; its a question about sexual status. In that case, you'd maybe sign up for pole fitness.

Some people will get angry at this, but a lot of the meaning of life for women comes from being sexually desirable. It's a good thing that there are companies like Iron X Fitness offering the opportunity to work on this in a safe, comfortable environment. And all sorts of good things come from this. You couldn't begin to tally up all the positive physical and mental benefits that come from the exercise these women will do.