Good advice: Blow up your relationship with your mother

The word "idolatry" conjures up images of funny little carvings of misshapen gods from distant, exotic places like Africa, India or the Pacific Islands. In truth, idolatry is something far closer to home. It looks like this: 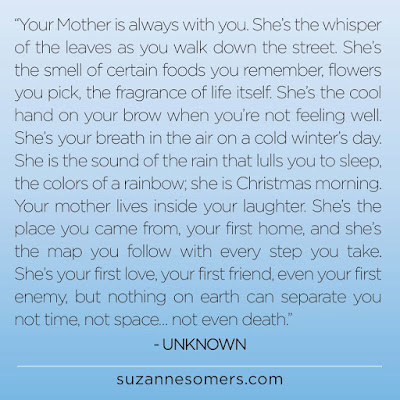 Okay, Suzanne Somers is a twinkie who believes some utterly crazy shit so who cares that she decided to share this sentimental crap? Well, a lot of people apparently. Someone I know shared that on Facebook on the anniversary of her mother's death. She's in her eighties and she thinks of her mother as some sort of pantheistic presence.

That isn't healthy. It's a refusal to grow up.

I've spent a lot of time on this blog castigating those who give bad moral advice and not enough on the good advice. Today, I'm going to begin what I hope will be an ongoing series highlighting some of the good advice I've found out there. Beginning with this gem: Blow up your relationship with your and get one step closer to being the man you want to be.

That's good advice even if your mother is dead.

Email ThisBlogThis!Share to TwitterShare to FacebookShare to Pinterest
Labels: The advice they give